Spot power prices decreased yesterday with influence coming from weaker demand and lower gas prices. However, some bullish pressure was provided by an outage at a coal-fired power station in Holland and reduced generation from renewables. Gas prices displayed a significant decrease yesterday as demand levels plummeted, resulting in a well-supplied UK gas system. Below average temperatures are expected to return to the UK next week which will increase demand, while a drop in BBL and Norwegian flows has tightened the gas system this morning which could result in a rebound. Today's prices can also be found in an easy to read table on our 'current UK energy price' page.

Gas prices fell yesterday due to lower demand levels and a halt in exports to Belgium, resulting in comfortable supply. The UK gas system was 18mcm long and maintenance is expected to continue at the Belgian interconnector until the 24th of July, which should help storage levels to rise. Power prices decreased as a consequence of warm weather and weaker fuel prices, with further influence coming from falling gas. Winter-15 fell by £0.50/MWh to end the session at £45.95, representing the contract's largest fall since April 2014. A stronger British Pound also helped to weigh on prices.

The UK gas system remains long this morning which has helped most contracts to open at a discount. Temperatures are expected to decrease next week which will lead to a rise in demand and could result in undersupply unless overall gas flows rise significantly. Power contracts followed the movement of gas despite a higher consumption forecast for next week. Day-Ahead was the main exception to the downward movement as the contract added £0.95/MWh to its price, with direction coming from weak renewable generation and cooler weather.

Market close data has revealed that the 1-year forward price for both commercial gas & commercial electricity decreased - closing at 46.03ppt and £44.38/MWh, respectively. This can be seen in the graph below. 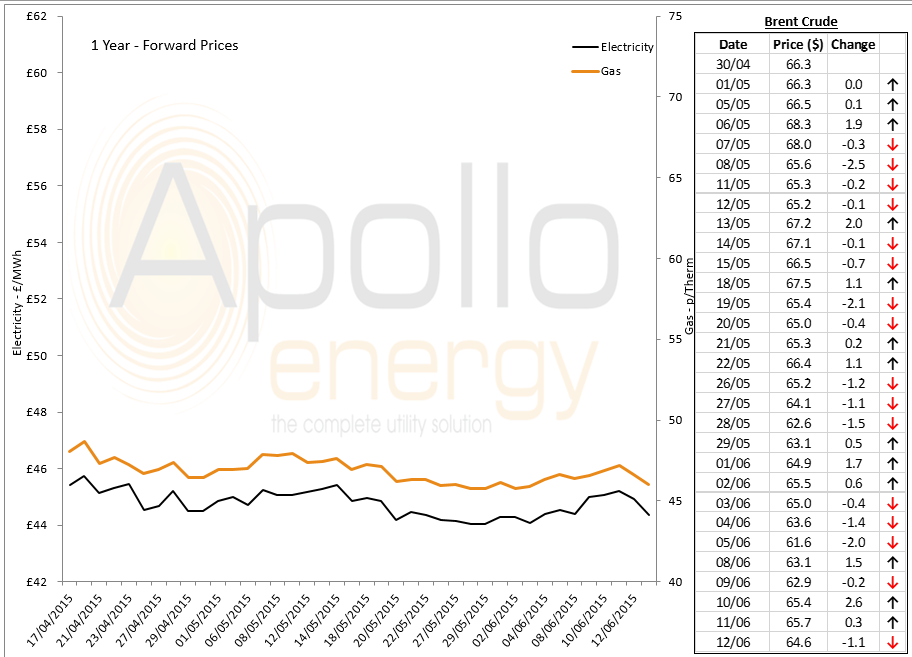 Brent 1st-nearby prices have fallen this morning after a sustained bullish period, with prices hitting a high of $66.4/b on Wednesday. Brent has dropped to around $64.6/b with no clear driver of prices at present due to mixed forecasting reports.