Spot power prices climbed higher yesterday as wind production remains low and milder weather has reduced demand. Wind production is expected to pick up tomorrow and temperatures are forecast to be slightly cooler but with warmer weathers expected next week; prices should stabilise this afternoon as a result. Gas prices also increased yesterday as reports from Poland, Hungary and Slovakia show that gas transport through Ukraine was reduced. Fundamentals in general are rather healthy but news of extra Russian deliveries should provide some support to prices. Today's prices can also be found in an easy to read table on our 'current UK energy price' page.

Gas contracts displayed gains by the end of Wednesday's session as news from Poland indicated a drop in Russian supply. Contracts increased by 0.45ppt on average with the UK gas system falling 5mcm short. Bacton BBL flows were 10mcm lower, while South Hook output rose by 2mcm. Coal-fired generation remains the largest contributor to the UK fuel mix as several power plants have returned online this week. Power prices rose yesterday and followed their gas counterparts closely with December-14 showing the biggest gain of £0.70/MWh. Wind generation levels were weak but were forecast higher on Thursday, providing some bearish pressure.

Gas prices strengthened further this morning with Day-Ahead opening at a 0.15ppt premium. The UK gas system opened 8mcm short due to reduced gas flows as BBL output fell to 15mcm. Norwegian flows have also decreased as maintenance is set to begin at the Kollsnes gas field. Meanwhile, seasonal contracts ignored weakening Brent. Power prices displayed a similar trend to gas with minor gains observed across the curve. Day-Ahead was the exception to the upward movement and opened £0.50/MWh lower as wind generation is slowly improving and with the usual drop in demand on Friday a factor.

Market close data has revealed that the 1-year forward price for both commercial gas & commercial electricity moved higher- closing at 57.80ppt and £50.65/MWh, respectively. This can be seen in the graph below. 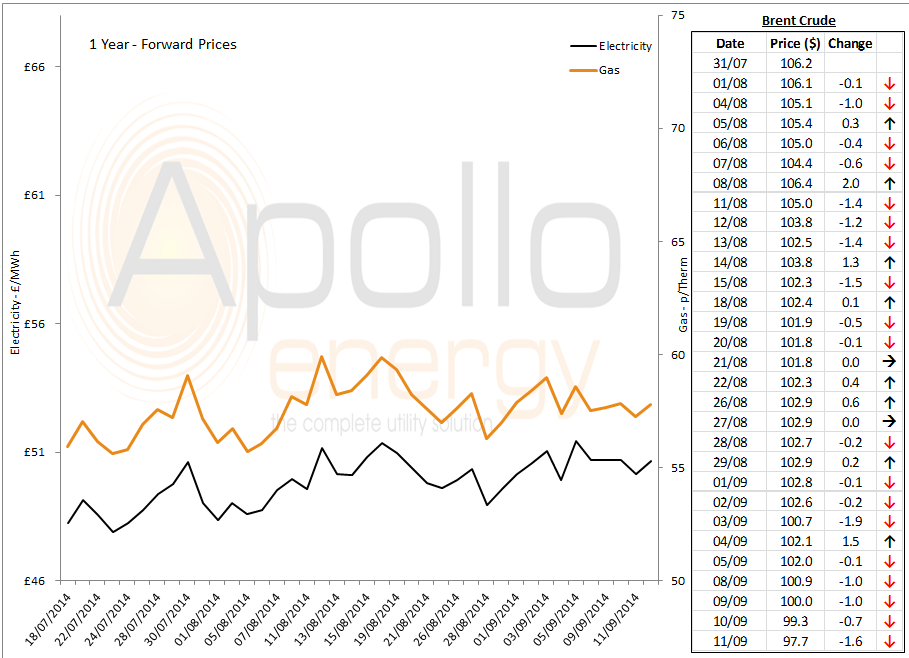 Brent 1st-nearby prices recorded further losses yesterday and fell to around $98/b, while WTI also hit a 9-month low of $91.22/b. A bearish EIA stocks report provided downward pressure despite on-going tensions in Iraq.