Spot power prices moved down yesterday as wind generation levels were expected to improve today, making up for a fall in coal and lignite availability. The usual rise in demand on Mondays should push prices higher this afternoon with a weaker renewable generation forecast for the weekend also providing support. Healthy supply levels and milder temperatures resulted in an over-supplied gas system in most European countries which weighed on prices yesterday. Temperatures are set to get warmer next week which should lead to further downward movement, although the market will be dependent on news from Ukraine. Today's prices can also be found in an easy to read table on our 'current UK energy price' page.

The gas curve displayed numerous gains yesterday with Front-quarter climbing 0.15ppt higher and Winter-14 adding 0.25ppt to its price as some traders have winter supply concerns. Day-Ahead fell by 0.70ppt as Linepack was long throughout the session helped by extra withdrawals from the Holford storage facility. Some power contracts moved higher including Day-Ahead which rose by £0.50/MWh and October-14 which closed at a £0.35/MWh premium. Reduced gas flows via Ukraine into Poland have caused some concern despite reassurances that output will return to normal over the weekend.

Overall gas flows increased by 28mcm today as Bacton BBL and St Fergus output ramped up by 14mcm combined, while Holford was withdrawing at a rate of 16mcm. As a result the UK gas system opened 9mcm long but worries over supply into Poland remains the main market driver; resulting in some gains. Coal-fired generation has retained the largest share (34%) of the fuel mix this morning, limiting the need for more expensive gas. Brent crude currently trades at its lowest point for 2-years due to a low demand forecast; this helped to weigh on some far-curve prices.

Market close data has revealed that the 1-year forward price for commercial gas moved higher while commercial electricity recorded a loss - closing at 57.95ppt and £50.58/MWh, respectively. This can be seen in the graph below. 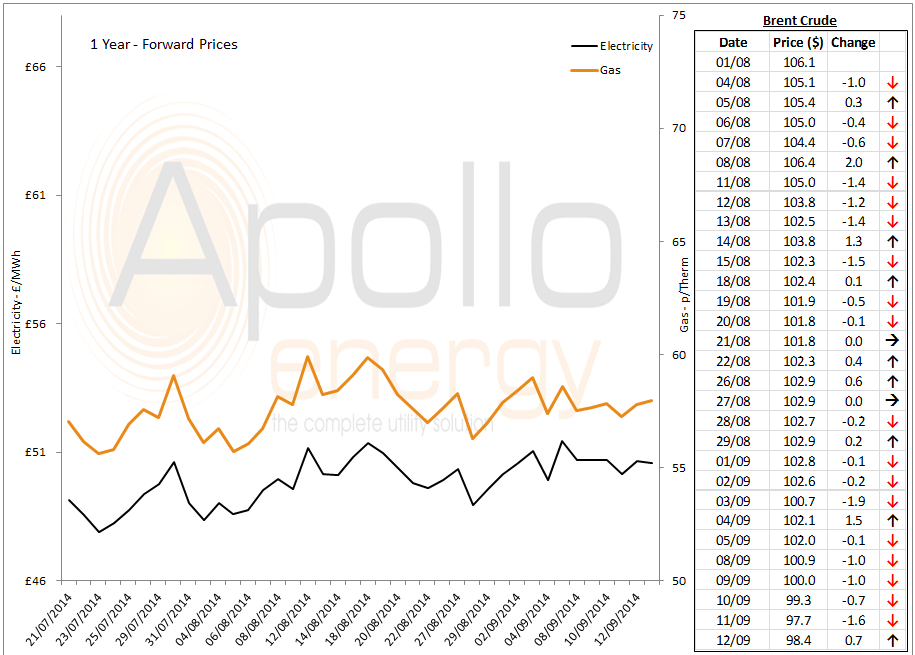 Brent 1st-nearby prices rebounded yesterday following a substantial loss over the last week. The Brent/ WTI spread stands at around -$5/b, similar to July's levels with a weak European and Chinese demand forecast a market driver.