Supply issues led to week and month-ahead prices posting gains yesterday however warm weather is set to continue which will limit the price increases. There was little change in gas demand and BBL flows have increased from 0mcm to 13mcm this morning which should see August 2013 prices fall.

Every gas contract made a loss yesterday except Winter-15 which was unchanged despite BBL pipeline flows remaining at 0mcm. Day-Ahead fell by 0.40ppt as temperatures are above the seasonal average and will remain so for the next few days. Seasonal contracts fell on the back of weaker Brent prices with the losses ranging between 0.05ppt and 0.20ppt. Day-Ahead power posted a gain of £2.50/MWh and was the only contract to go up as the rest of the curve mirrored gas. The bearish direction was influenced by improved nuclear availability and weaker Brent prices.

Day-Ahead gas shed 0.40ppt from its price and Front-Month lost 0.10ppt as near-curve prices opened lower with the system at 8 mcm long. Flows via the BBL pipeline increased to 13mcm which had a knock on effect and resulted in improved total gas flows. Winter-14 was the only contract to make a gain as Brent Crude prices influenced far curve contracts. There was mixed direction on the power curve as Day-Ahead and Front-Month opened at a discount but there was only minor movement on the rest of the curve. Any gains were restricted by higher supply levels and lower Brent and APi2 coal prices.

Market close data has revealed that the 1-year forward price for both commercial gas & commercial electricity decreased - closing at 68.40ppt and £51.85/MWh, respectively. This can be seen in the graph below. 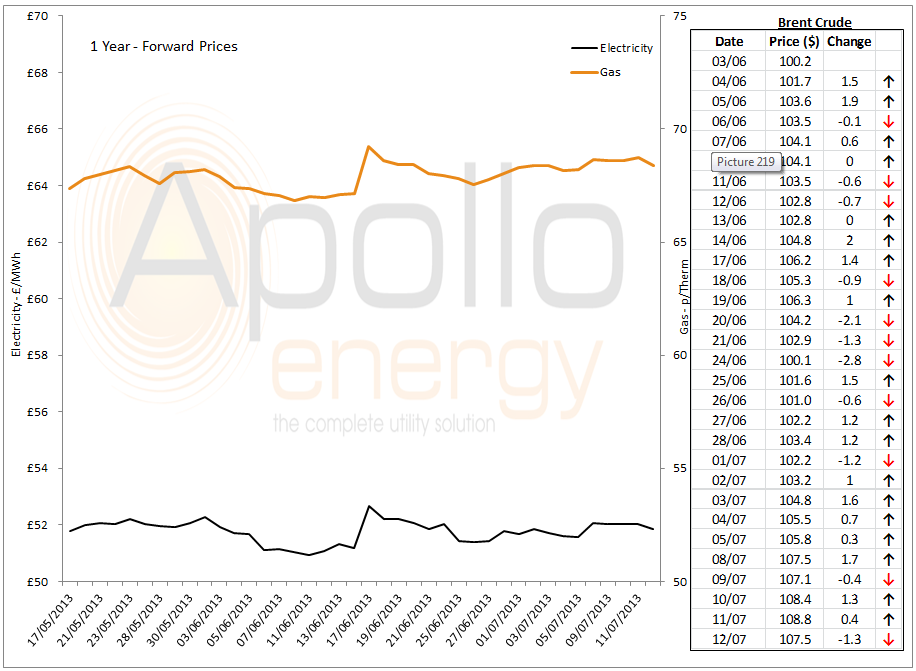 Brent 1st-nearby prices decreased yesterday as there is a positive outlook on the market following the Chairman of the US Federal Reserve's speech. The tensions in Egypt have been the main cause for recent price increases but the situation has calmed in the last few days.