Warm temperatures look set to continue but current supply issues are thought to be the biggest price influencer at present. A number of outages occurred in Germany and France which has led to a decrease in production and should prevent any losses to spot prices. Improved BBL and Langeled flows resulted in a healthy UK system and led to NBP spot prices decreasing; August-13 fell by 0.47% and closed at 65.5ppt.

A long system helped by the warm weather led to prompt prices falling, Langeled and BBL flows also increased. Day-Ahead went down by 0.65ppt and closed at 64.75ppt while Far-Curve prices also made losses with Winter-13 closing at 72.5ppt, a loss of 0.25ppt. Reduced coal-fired and nuclear availability saw Day-Ahead power add 0.7ppt to its price as gas-fired generation was required to meet demand. Front-Month decreased by £0.25/MWh as the contract followed a similar direction to its gas counterpart and APi2 coal prices fell due to concerns regarding economic growth in China.

Day-Ahead gas added 0.85ppt to its price to open at 65.6ppt as the system was short at the start of the session. The Front-Month contracts saw little movement but a LNG delivery is expected at South Hook tomorrow which should lead to contracts taking a bearish direction. Winter-13 went up by 0.3ppt with stronger Brent prices the influencing factor and storage levels are around 18% lower than they were this time last year. Day-Ahead power dropped by £0.20/MWh as a consequence of multiple nuclear and coal-fired plants restarting after spending the weekend offline. Warm temperatures and improved wind generation have also led to the bearish trend currently displayed on the power curve. Front-Month also moved down but only marginally, losing £0.10/MWh on the back of lower gas, carbon allowances and APi2 coal prices.

Market close data has revealed that the 1-year forward price for both commercial gas & commercial electricity went down - closing at 68.35ppt and £51.80/MWh, respectively. This can be seen in the graph below. 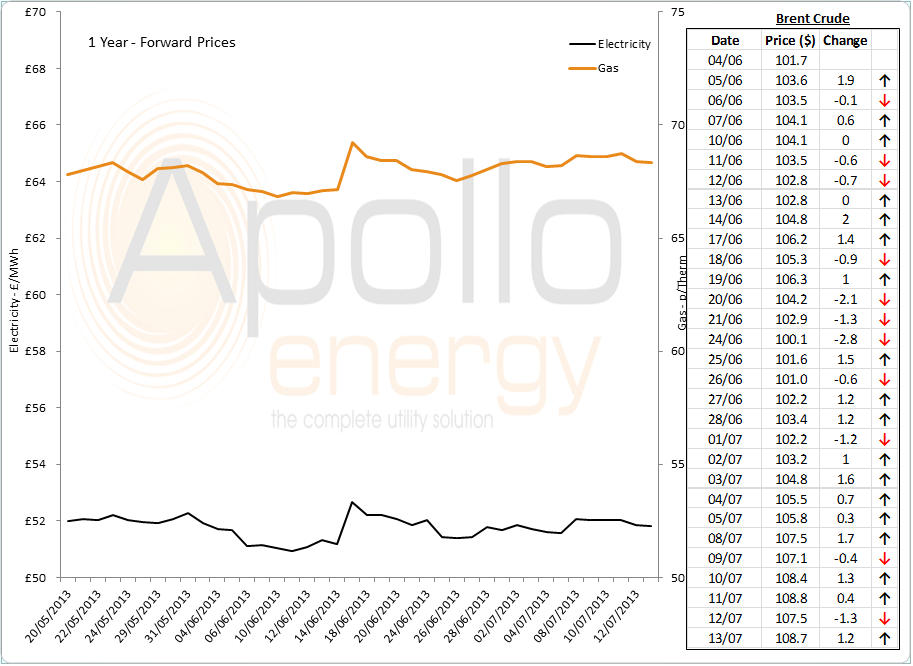 Brent 1st-nearby prices climbed to 109.1 on Friday and closed above their 200-day moving average which could lead to further gains. US gasoline prices went up 4.04$/b due to a number of refinery issues.