The market should see healthy supply levels until later in the week as nuclear availability and hydro energy production are currently at ample levels. A number of nuclear facilities returned online which should result in steady nuclear generation while lignite production is also expected increase. Despite the temporary closure of the Kollsnes plant and Langeled pipeline due to maintenance the gas system is still well-supplied as demand levels are currently low. Today's prices can also be found in an easy to read table on our 'current UK energy price' page.

The gas curve displayed a number of losses on Friday with Day-Ahead falling by 0.25ppt to close at 66.15ppt as the system remained long throughout the session. Send-outs via Milford Haven decreased to 12mcm, dropping by 3ppt throughout the session and one LNG shipment is expected to arrive this week. Day-Ahead power climbed £0.15/MWh with the expected increase in demand today an influence although most contracts made a loss. While the system buy price reached £140/MWh early in the session which resulted in a number of hydro facilities and storage units being brought back online.

Day-Ahead gas opened the session 1.85ppt lower as a result of improved LNG send-outs, the return of the Holford storage facility and a delivery expected from Norway. The Front-Month contracts also shed from their price as maintenance has been completed at various facilities. Further along the curve, Winter-13 was the only seasonal contract to register a price drop as most other contracts followed rising Brent. Prompt prices decreased as Day-Ahead opened £0.35/MWh lower due to improved wind availability and the scheduled maintenance at a 580MWh nuclear reactor being pushed back. Seasonal contracts displayed a number of small price increases and took direction from stronger APi2 coal prices which currently stand at $75.25/tn.

Market close data has revealed that the 1-year forward price for both commercial gas & commercial electricity fell slightly - closing at 67.58ppt and £51.40/MWh, respectively. This can be seen in the graph below. 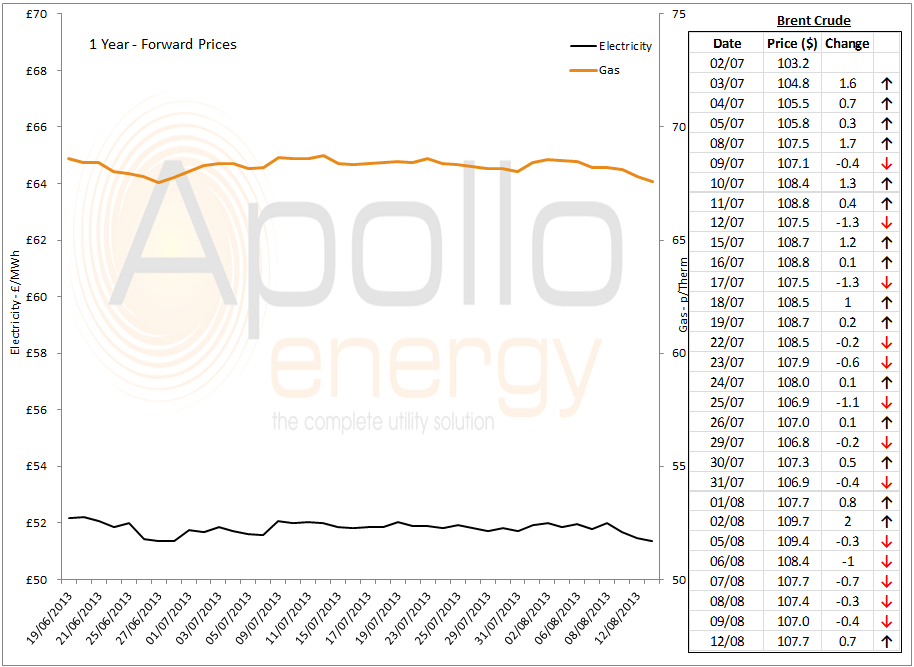 Oil prices saw a rise on Friday on the back of stronger Chinese economic data with Brent adding $1.5/b to its price and WTI gaining $2.6/b. Libyan exports are still at lower than average levels but Libyan officials have reassured the market in regards to recent supply threats.