Spot power prices climbed higher yesterday, taking direction from stronger gas despite relatively low demand and healthy generation. Prices opened lower this morning and a further loss could occur if the carbon market continues to weaken. Gas prices followed an upward trend yesterday as increased demand and on-going maintenance supported the bulls. This morning the UK gas system has opened balanced and demand has decreased which has weighed on prices. However a drop in Norwegian gas flows could result in Linepack falling short; leading to a rise in prices. Today's prices can also be found in an easy to read table on our 'current UK energy price' page.

Gas contracts opened higher on Monday morning but fell throughout the day and traded lower at the end of the session. Linepack was over-supplied for most of the day as gas-fired generation decreased its share of the fuel mix. Russian gas supply remains an on-going concern which helped to push the Day-Ahead contract higher, closing at £35.85/MWh. Elsewhere, numerous nuclear power plants went offline due to scheduled maintenance and are not expected to return till the end of September; providing further bullish support.

UK storage levels remain just under 95%, while European stocks stand at around 83% on average. The Rhum gas field which lies off the coast of Aberdeen is expected to resume production following successful negotiations between the UK and Iran. The return of this field which has been offline since 2010 is expected to add around 4% to overall UK gas supply. On the back of this healthy supply picture and with the addition of 2 LNG deliveries this week, bearish movement has been displayed across the curve. Wind generation levels are expected to decrease tomorrow which has provided support to Day-Ahead power. Meanwhile, carbon contracts have opened unchanged and oil prices continue to weaken which has resulted in some contracts opening at a discount.

Market close data has revealed that the 1-year forward price for both commercial gas & commercial electricity decreased - closing at 58.25ppt and £50.13/MWh,respectively. This can be seen in the graph below. 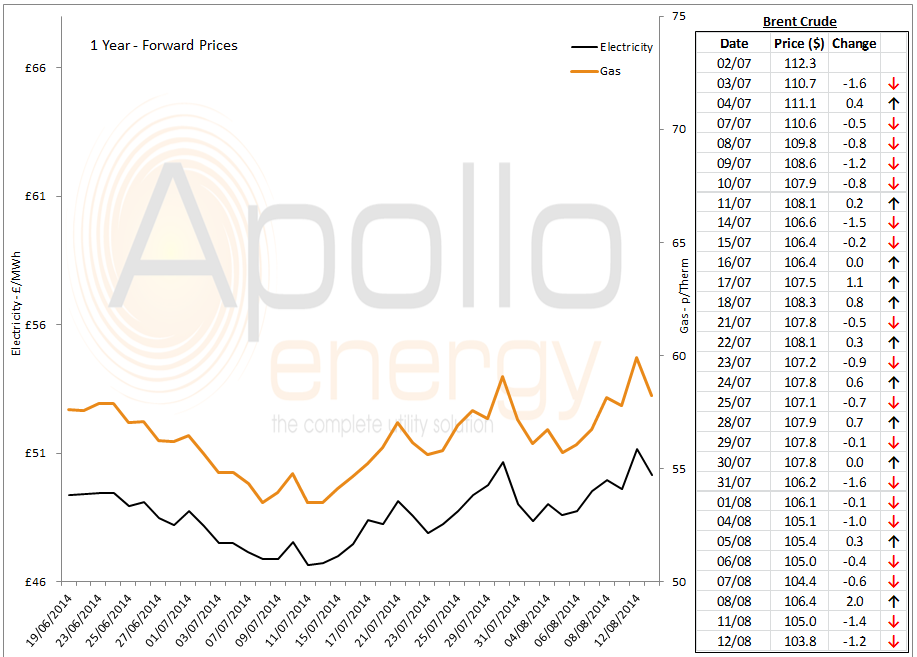 Brent 1st-nearby prices fluctuated yesterday but recorded a loss by the end of the session to close at $104/b. Meanwhile, WTI remains between $97-$98/b which has taken the Brent/ WTI spread to $6.5/b.