Spot power prices followed a bearish trend yesterday due to improved nuclear availability and low demand. There has been little change to fundamentals this morning and prices are expected to stabilise, although some downward movement cannot be ruled out. Gas prices climbed higher by the end of yesterday's session as the UK gas system fell short on the back of reduced Norwegian output. The main driver of prices at present is the situation in Ukraine which could restrict Russian supply into Europe over the winter months, pushing prices higher. Today's prices can also be found in an easy to read table on our 'current UK energy price' page.

News of possible Ukrainian sanctions resulted in bearish movement on Tuesday with most near-curve contracts closing lower. Day-Ahead decreased by 0.05ppt to close at 38.40ppt, while seasonal contracts moved down as a consequence of weak demand. Day-Ahead power strengthened yesterday as increased consumption and reduced supply supported the bulls. On the far-curve most contracts followed their gas counterpart with further downward pressure coming from a stronger British Pound.

Upward movement could be observed on the gas curve this morning following a rebound in prices. Day-Ahead opened at a 0.75ppt premium due to a short UK gas system, although supply is expected to improve this afternoon. Further out, contracts also displayed gains with summer-16 adding 0.90ppt to its price. On the power curve Day-Ahead climbed £2.00/MWh higher as demand levels are set to rise and wind generation is expected to fall tomorrow. A number of coal and nuclear power plants will undergo maintenance in the next few weeks which will increase the UK's reliance on wind and gas-fired generation. Further along the curve most contracts followed gas, showing gains which ranged between £0.20/MWh and £0.70/MWh.

Market close data has revealed that the 1-year forward price for commercial gas moved higher while commercial electricity made a small loss - closing at 58.40ppt and £50.10/MWh,respectively. This can be seen in the graph below. 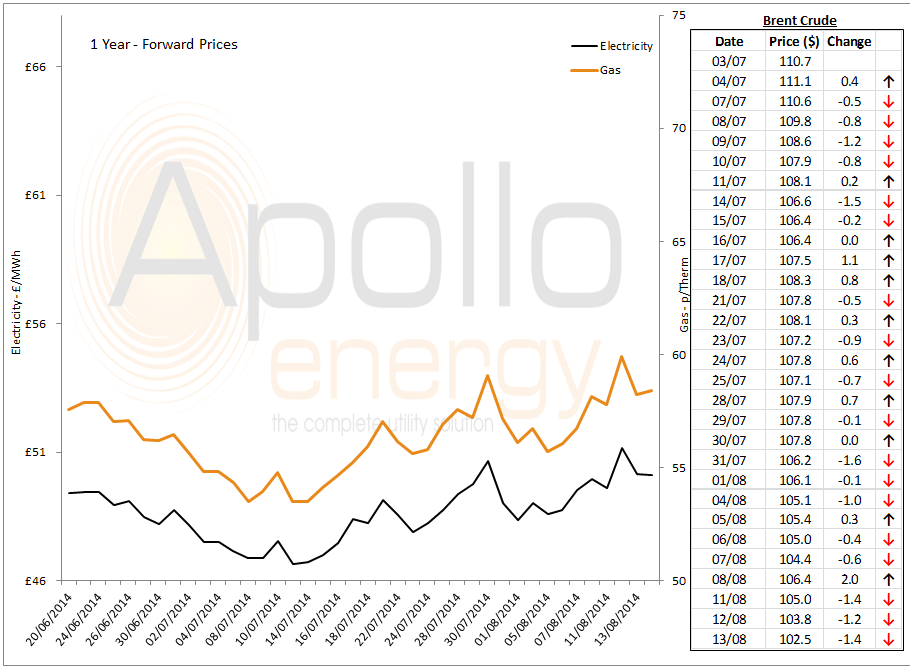 Brent 1st-nearby prices tumbled further yesterday, shedding $1.66/b over the course of the day. Meanwhile, WTI fell by $0.71/b as global oil supply remains strong despite tensions in Iraq and Eastern Europe.