Spot power prices showed little movement yesterday as fundamentals were generally unchanged. Milder weather in Europe and healthy supply has provided downward pressure but the majority of the losses are minimal. Gas prices continued to move down yesterday as European systems remained well-supplied and demand levels were slightly below average. Temperatures are to temporarily revert back to the seasonal average over the weekend, providing some support to prices. However, the UK gas system has opened long once again as Norwegian imports rose; further price-drops are expected. Today's prices can also be found in an easy to read table on our 'current UK energy price' page.

Gas prices failed to display any upward movement on Thursday despite the UK gas system falling short as the session progressed following an outage at a Norwegian pipeline. An LNG cargo is scheduled for delivery next week which helped the majority of near-curve contracts close at a discount. Power contracts followed their gas counterparts and displayed losses, the bears were also assisted by the forecast of milder temperatures next week which should reduce demand. Further along the curve, prices weakened by the end of the session with impetus coming from low oil prices.

The UK gas system opened 4mcm long this morning with total gas flows increasing by 8mcm. This helped Day-Ahead and the rest of the near-curve record losses but overall movement on the curve was minimal. Power prices displayed only small movements in either direction with the exception of Day-Ahead which fell by £1.95/MWh due to an expected rise in wind generation next week. Meanwhile, some support was provided by both scheduled and unplanned outages at power plants.

Market close data has revealed that the 1-year forward price for commercial gas decreased while commercial electricity recorded a small gain - closing at 54.03ppt and £49.60/MWh, respectively. This can be seen in the graph below. 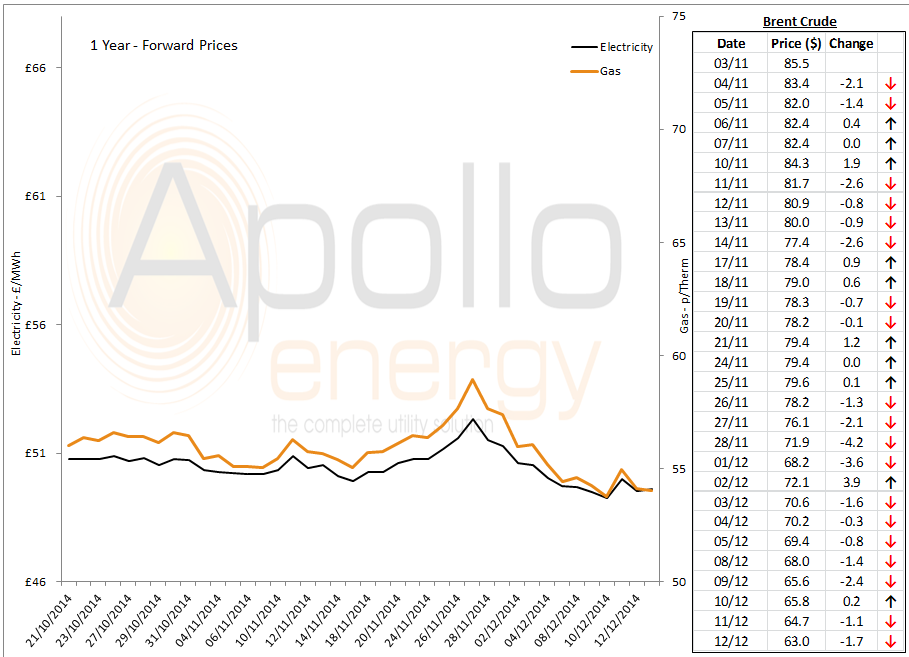 Brent 1st-nearby prices showed no sign of strengthening yesterday and recorded another loss of over $1.50/b, now trading just below $63/b (a 5 and half year low). Meanwhile, WTI has also dropped significantly and has hit its lowest price since July 2009