Spot power prices have increased on the back of weaker nuclear generation, despite mild temperatures across Europe. Renewable generation improved over the weekend and has offered some support to the bears, helping towards a stable-to-bearish outlook for this afternoon. Gas prices moved down on Friday as warm weather was the main market driver, offsetting the effect of numerous outages at gas facilities in Norway due to maintenance. Despite a slight drop in temperatures today, warmer weather is set to return later in the week, reducing demand levels. However, supply levels are still reduced as a result of annual maintenance and no major movement is expected today. Today's prices can also be found in an easy to read table on our 'current UK energy price' page.

Gas prices displayed losses on Friday on the back of warmer weather which reduced demand. Scheduled maintenance at gas pipelines in Norway offered some support and restricted the downward movement as overall supply decreased. Some power contracts climbed higher on Friday due to a weaker supply picture, with French nuclear generation displaying a considerable drop. Elsewhere on the curve, a mild weather forecast and weaker gas helped some contracts to decrease in a day of mixed movement.

Most gas contracts have recorded a loss this morning with a mild weather forecast for the next couple of weeks the main contributing factor. Demand levels for April are expected to be well below the seasonal average and this has had a bearish effect across the curve. Day-Ahead power has displayed an increase this morning due to an expected drop in wind production and a slight uptick in demand for tomorrow. However, downward movement was displayed on the rest of the curve as the majority of contracts followed their gas counterparts.

Market close data has revealed that the 1-year forward price for both commercial gas & commercial electricity increased slightly - closing at 47.93ppt and £45.30/MWh, respectively. This can be seen in the graph below. 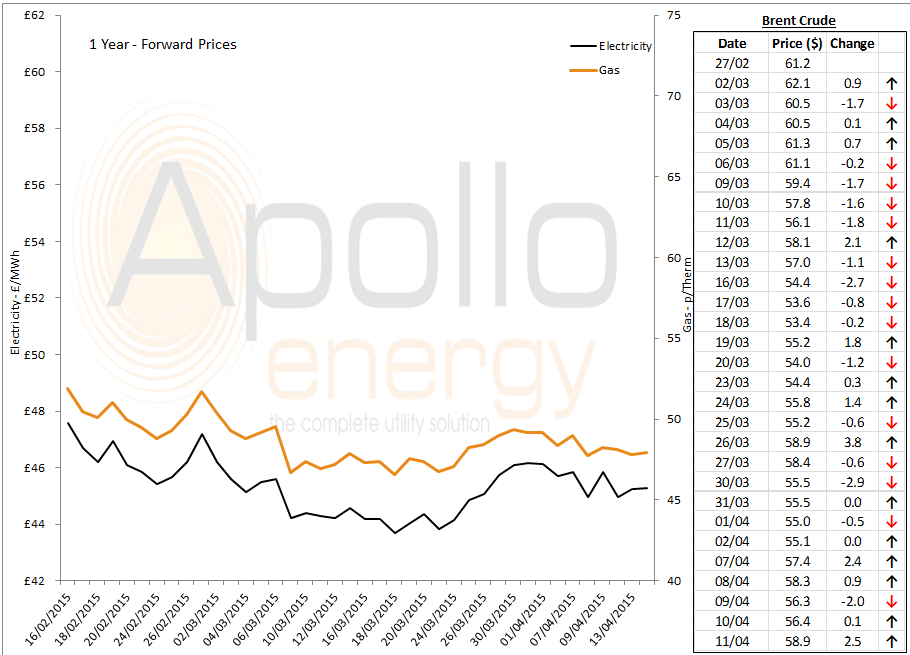 Brent 1st-nearby prices have recorded significant gains over the weekend, rising by around $2.50/b to trade at $58.87/b; stronger production in the US remains the main market driver.