Spot power prices have received support from limited nuclear availability in France and an expected drop in wind generation across Europe, with further upward pressure coming from stronger gas. Gas prices decreased yesterday as warmer weather is expected to return this week and scheduled maintenance at gas facilities did not heavily disrupt supply. Today, prices have opened higher as the market awaits news on whether output at the Groningen facility will remain at current levels or suffer another cut. Today's prices can also be found in an easy to read table on our 'current UK energy price' page.

Gas prices initially opened higher in yesterday's session but decreased in the afternoon as supply levels improved. The UK gas system opened short as a result of a significant drop in Norwegian and Dutch flows. However, the system became balanced in the afternoon following an increase in LNG flows and storage withdrawals. Similar to the gas curve, power contracts opened at a premium but eventually shed from their price due to a milder weather forecast for April. Some additional bearish pressure was provided by a postponement in planned maintenance at UK coal plants.

The gas curve has displayed small increases this morning as supply levels are still reduced due to scheduled maintenance. The Kollsnes facility in Norway is expected to return online on Thursday, while traders are waiting to hear whether output at the Groningen facility in Holland will be cut further. Power prices have also ticked higher this morning due to strengthening gas and weaker generation levels. Movement on the power curve is largely dependent on whether output at the Groningen gas facility remains as it is or whether further cuts are sanctioned.

Market close data has revealed that the 1-year forward price for both commercial gas & commercial electricity increased - closing at 48.90ppt and £45.75/MWh, respectively. This can be seen in the graph below. 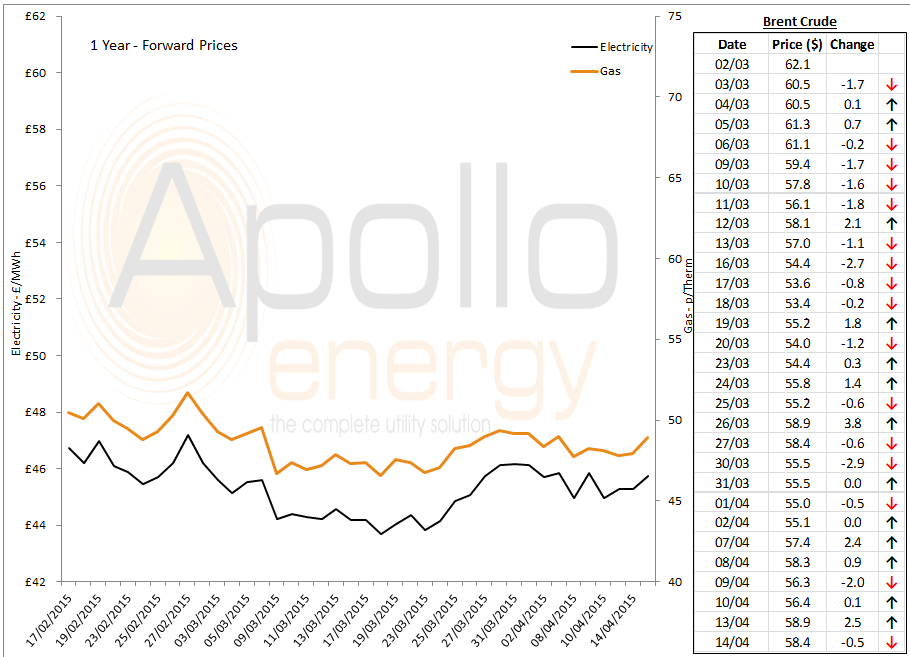 Brent 1st-nearby prices were extremely volatile yesterday moving by as much as $2/b in both directions before settling at a pretty much unchanged level of around $58.3/b. Mixed fundamentals and some uncertainty regarding NYMEX positions were the main cause for yesterday's chaotic movement.