Spot power prices moved down yesterday as renewable generation was healthy and supply levels were stable. A slight drop in temperatures and weaker renewables have supported prices this morning, with a rise in oil also playing a part. Gas prices decreased on Wednesday with direction coming from improved Norwegian supply and a healthy LNG outlook. Further losses have been recorded this morning as supply levels remain comfortable despite the system falling slightly short at the start of the session. Today's prices can also be found in an easy to read table on our 'current UK energy price' page.

Near-curve gas prices recorded sizeable losses on Wednesday due to improved supply levels as an outage in Norway was resolved. The completion of maintenance on the entry point at the SEGAL pipeline system, which connects to the St Fergus pipeline in the UK resulted in a 27mcm rise in gas flows. Demand levels were largely unchanged from Tuesday and the gas system was oversupplied. Further out, some contracts were offered support by a rise in Brent and a weaker British Pound. Power prices on the near-curve moved down yesterday as the Day-Ahead contract followed its gas counterpart, with further bearish pressure coming from stronger renewable generation. Similar to gas, the downward movement on the far-curve was restricted by a weaker Pound and a rebound in oil prices.

Some gas prices have displayed another decrease this morning as demand levels are stable and Norwegian supply has improved. However the UK gas system is slightly short due to an increase in storage nominations, resulting in mixed movement across the curve. A rise in Brent has supported some contracts on the far-curve, while Front-Month has decreased with two LNG deliveries scheduled to arrive in the next week. Power prices have increased this morning as temperatures are slightly cooler across Europe and wind generation has decreased. Meanwhile, stronger Brent and coal has offered support to contracts further along the curve.

Market close data has revealed that the 1-year forward price for both commercial gas & commercial electricity increased - closing at 42.88ppt and £42.95/MWh, respectively. This can be seen in the graph below. 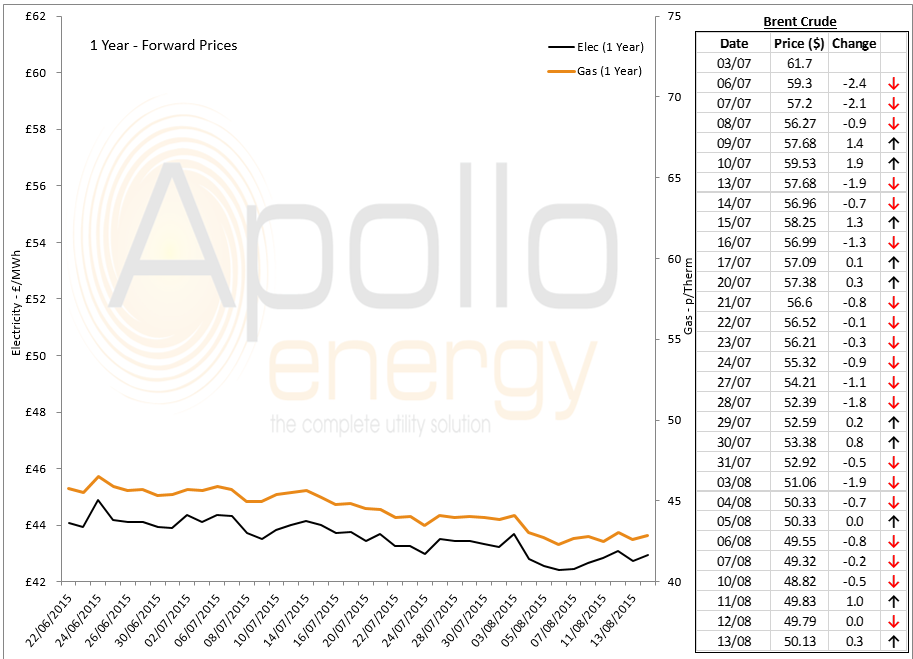 Brent 1st-nearby prices have moved back above $50/b following a decrease in U.S. stockpiles, with reports showing a drop of 1.7m barrels; further support has also been provided by higher diesel exports from China.