Spot power prices increased yesterday with direction coming from stronger gas and low wind generation. However, most of yesterday's losses have been cancelled out this morning as a drop in gas has dictated the market. Gas prices were bullish yesterday following a reduction in Norwegian flows which resulted in undersupply. Prices have displayed a loss this morning as overall gas flows have improved, although maintenance at the Nord Stream could have a bigger impact than initially thought. Today's prices can also be found in an easy to read table on our 'current UK energy price' page.

Gas prices increased on Tuesday with a rise in oil prices and a stronger Euro providing bullish pressure across the curve. An unplanned outage at the Entry SEGAL pipeline also helped the prompt move higher as Norwegian flows fell by 11mcm. Power contracts inched higher with most contracts following the upward movement of gas and oil. Weaker renewable generation also supported the prompt and the losses filtered through to the rest of the near-curve.

The gas curve has displayed price-drops across the board this morning, cancelling out yesterday's gains. Supply levels are generally stable as yesterday's outage in Norway was resolved, helping the Day-Ahead contract to open at a discount. Meanwhile, Brent has recorded a loss following a brief upturn yesterday, weighing on some far-curve contracts. Power contracts have tracked the bearish movement of gas, with further downward pressure coming from weaker coal prices. Increased solar generation has helped the prompt shed from its price and demand levels are stable as temperatures are around the seasonal norm.

Market close data has revealed that the 1-year forward price for both commercial gas & commercial electricity decreased - closing at 42.64ppt and £42.75/MWh, respectively. This can be seen in the graph below. 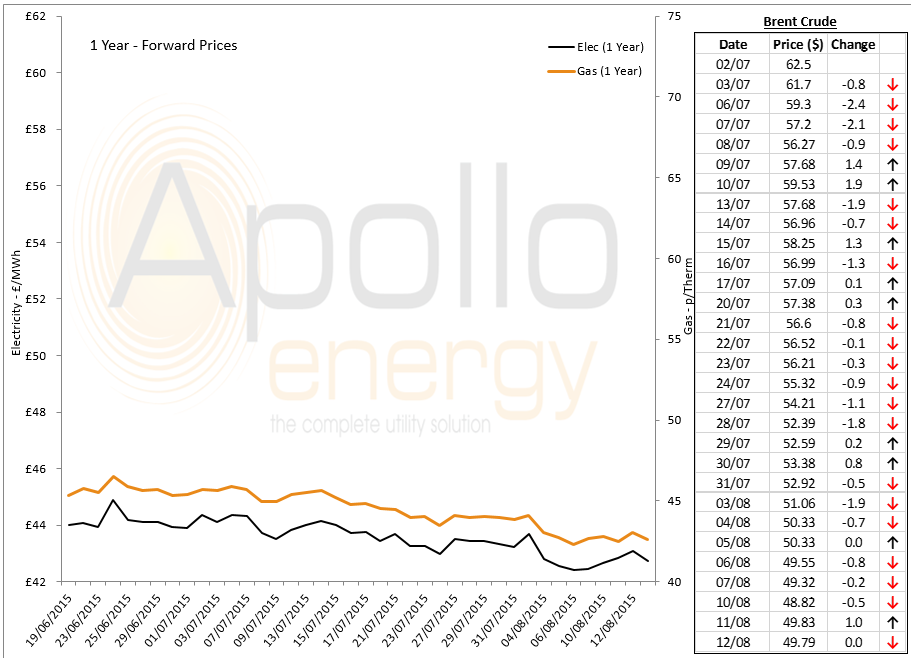 Brent 1st-nearby prices have recorded a small loss this morning and remain below $50/b with concerns regarding oversupply keeping prices low.