Spot power prices strengthened on Monday as colder weather led to a rise in consumption, while renewable generation is also below average for this time of year. Weaker fuel prices have helped contracts shed from their price this morning, with Brent posting a significant loss.

Gas prices moved down yesterday as the system was strongly oversupplied despite an increase in demand; supply levels were much stronger than Friday with improved output displayed at numerous terminals. Demand levels are expected to rise by 24mcm today and an outage in Norway has resulted in an undersupplied system this morning; a rebound in prices is likely.

Losses were observed across the gas curve yesterday as the system was oversupplied throughout the session following a sharp rise in supply. Demand levels edged higher due to colder weather but this failed to have much impact as the system opened around 40mcm long.

Day-Ahead fell by 1ppt as Norwegian flows and LNG send-outs increased.
Power prices decreased yesterday as temperatures are expected to improve later in the week and should be around the seasonal norm. Gas, coal and oil contracts also weakened and applied further downward pressure to the curve. The prompt decreased on the back of an improved wind generation forecast, despite a higher demand expectancy for today.

The system has opened 18mcm short this morning but this was ignored by gas contracts which opened at a discount. An upward revision in temperatures has helped to weigh on near-curve prices, while a sharp drop in Brent has pressured down the far-curve. Meanwhile, two LNG deliveries are expected to arrive in the UK over the next 10 days.

Wind generation is set to rise later in the week and should remain healthy over the weekend, helping the prompt and other near-curve power prices to decrease. Milder weather is also set to reduce residential demand which has also contributed to today's downward movement.

Market close data has revealed that the 1-year forward price for both commercial gas & commercial electricity decreased - closing at 41.45ppt and £42.55/MWh, respectively. This can be seen in the graph below. 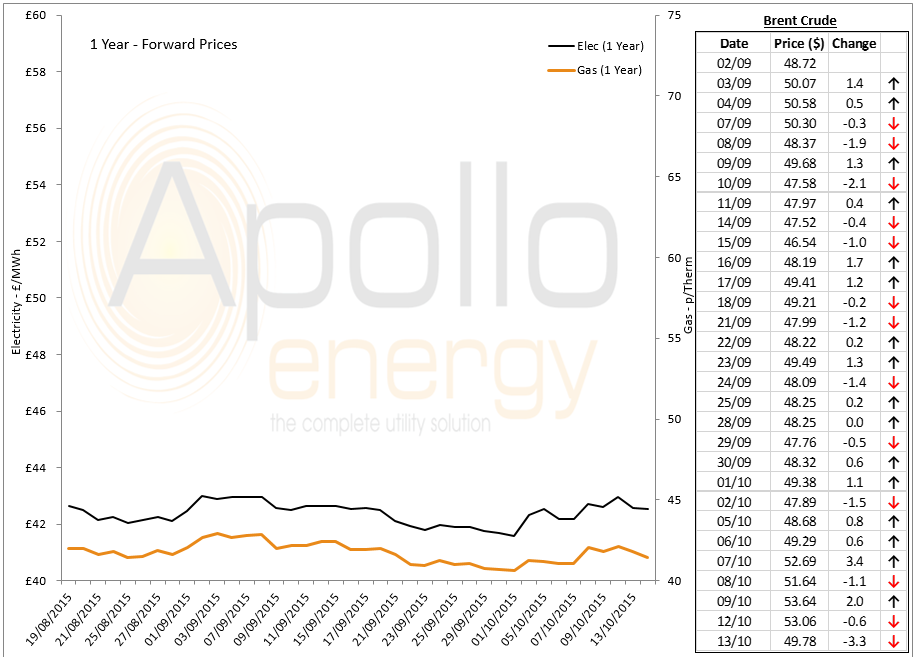 Brent 1st-nearby prices fell by almost $3/b yesterday and have posted further losses this morning to trade below $49.8/b. A downward correction was anticipated but the latest OPEC report and weak Chinese import data led to a stronger loss than expected.