Gas prices varied in their movement on Friday as improved supply levels were offset by rising demand. UK temperatures are below the seasonal norm this morning and residential demand is expected to be 16mcm below Friday's levels. Despite this, the system is 40mcm long following a sharp rise in LNG send-outs which should remain high for the rest of the month; helping prices to move down.

Gas prices displayed mixed movement on Friday as the UK gas system was oversupplied due to a rise in Dutch imports via the BBL pipeline, weighing on some near-curve contracts; Day-Ahead climbed higher on the back of the expected rise in demand. Further out, a weaker Pound helped to support contracts although a drop in Brent restricted the gains somewhat.

The gas system is around 40mcm long this morning due to a much improved supply picture which has helped numerous contracts to decrease. Flows via the Langeled terminal are 10mcm higher than Friday, 5mcm higher at St Fergus and LNG output is up by 15mcm with two deliveries expected to arrive in the UK this week.

Day-Ahead power has decreased this morning as renewable generation is set to improve in the coming days, reducing the UK's reliance on gas-fired generation. Wind production is forecast to rise by around 1.5GW tomorrow, while solar power is set to reach around 3GW. The rest of the curve generally followed the downward movement of gas.

Market close data has revealed that the 1-year forward price for both commercial gas & commercial electricity decreased - closing at 41.80ppt and £42.58/MWh, respectively. This can be seen in the graph below. 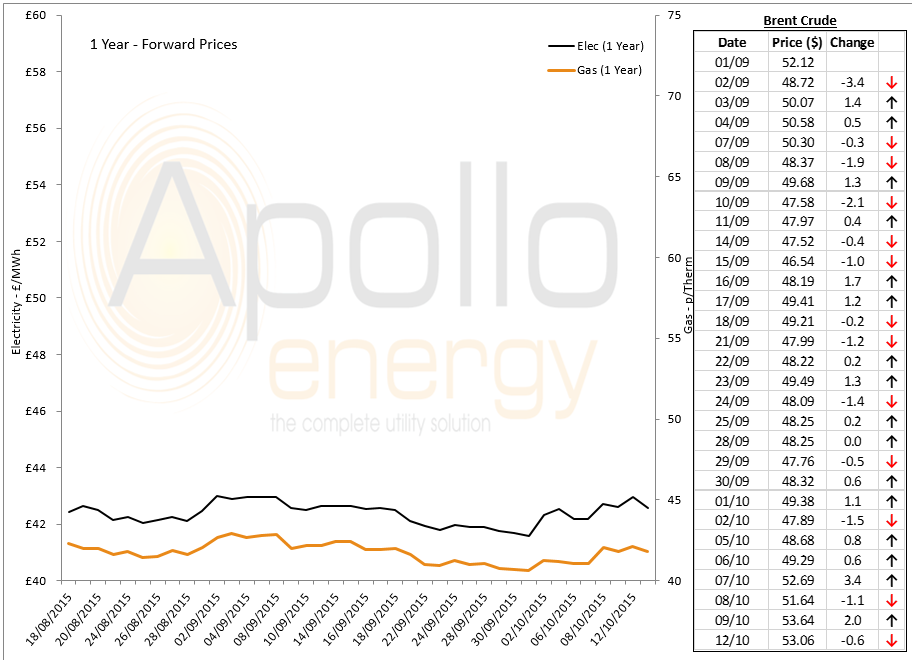 Brent 1st-nearby prices have corrected down this morning following a gain of over $4.5/b last week but the bulls still remain in control of the market as US rig counts were lower and the Dollar weakened.