The Spot market should see very little tension over the coming days because of healthy nuclear, hydro and wind generation in France. The weather in Europe is set to get colder as the week goes on but should improve by the middle of next week and we should see average temperatures for this time of year.

Day-Ahead gas rose by 1.00ppt and Front-Month went up by 0.05ppt yesterday due to a change in the weather forecast as temperatures are predicted to be below average for May. The unexpected outage at the Norwegian Troll field and reduced flows from the Langeled Pipeline and South Hook terminal were also a big factor in the rise in prompt contracts. The rest of the curve saw most contracts make a loss with Q4-13 dropping by 0.65ppt but Front-Quarter and Summer-14 went up slightly. Day-Ahead power followed its gas counterpart to make a gain, going up by £0.10/MWh to close at £46.50/MWh with reduced wind generation playing a part in the increase. A number of power plants are undergoing maintenance which also contributed to the price rise although Front-Month and Front-Quarter saw no change. The Far-Curve however saw numerous losses of up to £0.45/MWh as Brent, EUA and CER prices all fell.

The wider fuels complex displayed a bearish outlook but gas prices saw a series of increases due to the colder temperatures and lower supply. The Far-Curve also opened with a number of contracts going up on the back of a weaker GBP. The Gas market was a major influence on power contract prices which also went up with Day-Ahead adding £0.75MWh to its price, helped by reduced wind availability and several outages at power plants. Winter-13 and Summer-14 also went up and API2 coal dropped to $0.7tn on the back of lower European demand.

Market close data has revealed that the 1-year forward price for commercial gas & commercial electricity both made losses - closing at 66.62ppt and £51.28/MWh, respectively. This can be seen in the graph below. 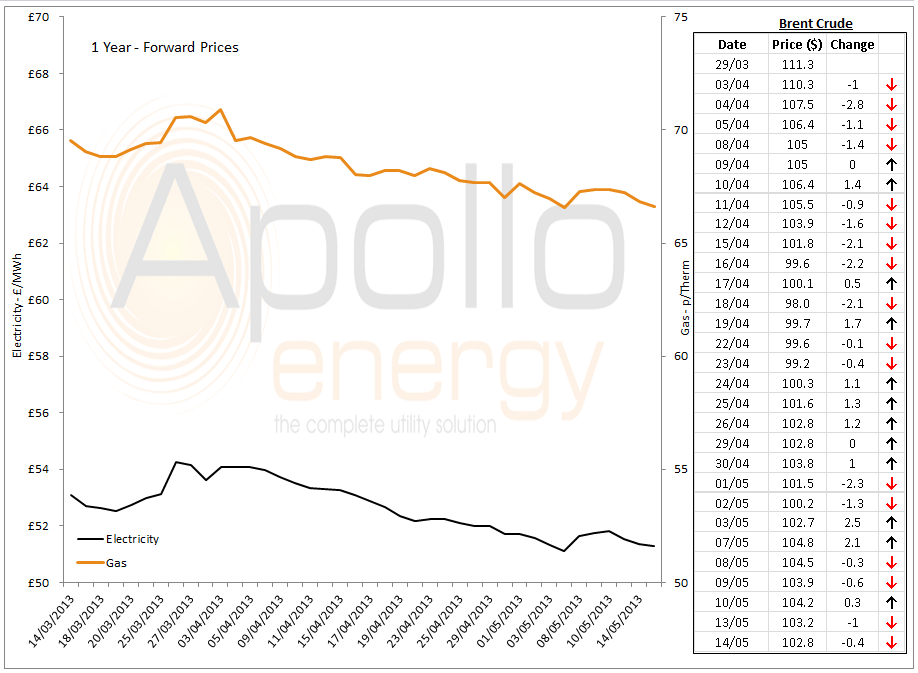 Brent 1st nearby prices closed the session 1.09$/b down as a result of weaker Chinese oil data. Retail gasoline prices saw their biggest drop in 4 years in April and tensions in oil producing countries I.E. Syria, Iraq & Libya may have an effect on supply.