Gas prices were bullish yesterday and a series of gains were made across the curve, Day-Ahead went up by 1.00ppt and Front-Month saw a rise of 0.75ppt. The reduction in flows coming from the Langeled pipeline which has led to a short system remains one of the biggest influences on prices. Linepack fell to 11mcm short yesterday afternoon and didn't become long until evening. Power prices followed a similar direction to gas with Day-Ahead making a gain of £0.20/MWh and Front-Month increasing by £0.45/MWh. A 600MW nuclear reactor in Hartlepool turned offline yesterday and will remain that way until the end of the month which will help the bulls remain in charge of the power curve; a coal-fired plant also became offline on Monday.

The system opened the session 9mcm short with BBL and Interconnector in export mode as the Zeebrugge and NBP spread stands at 0.2ppt. Prompt prices and the Near-Curve made small gains up to 0.2ppt while seasonal contracts saw little change. Day-Ahead power went up by £1.75/MWh today and the rest of the curve saw mixed movement. Wind generation decreased by 36GWh and its share in the fuel mix fell to 6% with gas-fired generation increasing its share to 27%.

Market close data has revealed that the 1-year forward price for commercial gas & commercial electricity both made gains - closing at 67.35ppt and £51.63/MWh, respectively. This can be seen in the graph below. 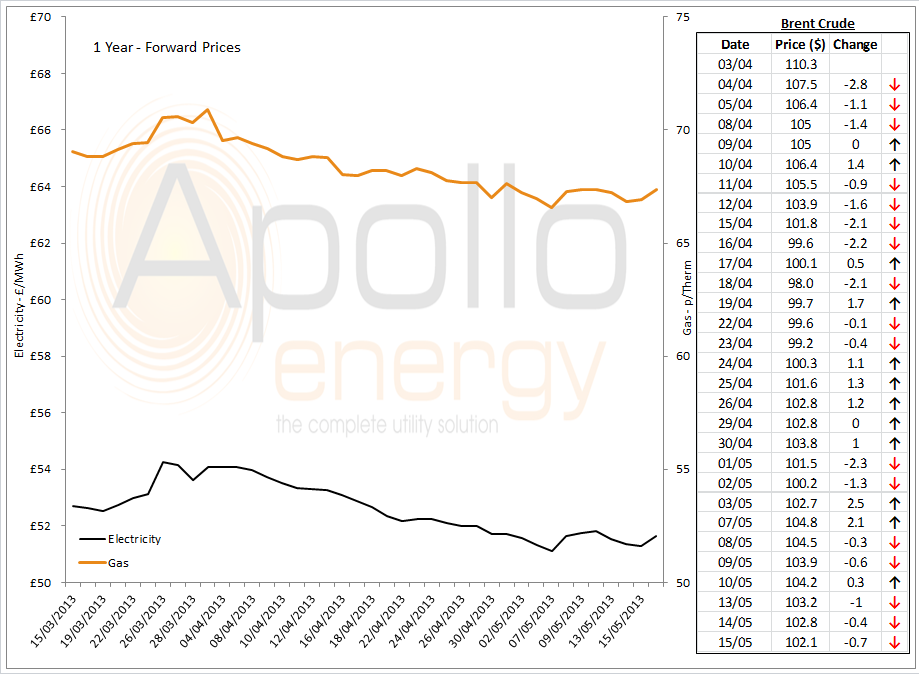 Brent 1st nearby prices fell by 0.22$/b yesterday and WTI dropped 0.96$/b although Gasoline prices managed to make gains. The IEA monthly oil market report shows that OPEC Crude has decreased by 0.1Mb/d in 2013 and OPEC output rose by 0.2Mb/d to 30.7Mb/d in April.