Spot power prices are stable at present as a colder weather forecast has been offset by weakening gas. However, renewable generation is slightly reduced as solar generation across Europe is set to decrease in the coming days. Gas prices moved down yesterday as the UK gas system remained well-supplied due to healthy Norwegian flows and average demand levels. Prices continue on a downward trend this morning as supply levels are expected to improve further, with a number of LNG deliveries scheduled to arrive this month. Today's prices can also be found in an easy to read table on our 'current UK energy price' page.

Gas contracts were on the decline yesterday as the morning's gains were wiped out despite a cooler weather forecast. An improved supply picture helped the bears take control of the gas market in the afternoon as the UK gas system was comfortable throughout the session, with additional LNG deliveries also expected this month. Power contracts displayed very little movement on Wednesday as June-15 ended the session unchanged and seasonal contracts recorded minor losses. Meanwhile an expected increase in wind generation today was countered by a weaker solar forecast.

The gas curve has displayed further losses this morning on the back of healthy Norwegian and Russian flows and a drop in demand due to a national holiday in some European countries. Norwegian gas flows in to the UK are set to increase further in the coming days and the system is expected to remain long despite a drop in temperatures. Power prices have followed their gas counterparts this morning, ignoring an expected rise in consumption. However, weaker renewable generation has resulted in an increased reliance on gas and coal-fired generation which has provided some support.

Market close data has revealed that the 1-year forward price for both commercial gas & commercial electricity decreased - closing at 46.98ppt and £44.85/MWh, respectively. This can be seen in the graph below. 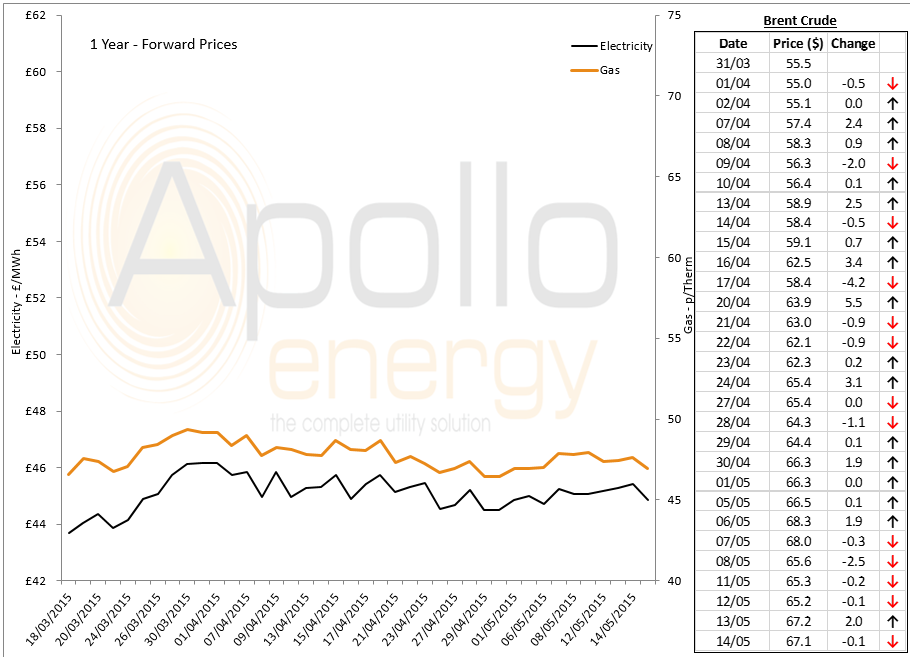 Brent 1st-nearby prices are stable at present and recorded a loss of just $0.09/b overnight to remain around $67/b; weak oil production in the US continues to restrict any upward movement.