Spot power prices are on the rise but still remain at relatively low levels for this time of year. Wind generation levels are healthy this week, while solar generation is also relatively strong. Prices have been pushed higher this morning by stronger gas and oil and a mild weather outlook for next week has had little effect on the market. Gas prices stabilised yesterday afternoon following a bullish morning session as a lower demand forecast restricted any additional gains. Fundamentals are generally unchanged today with demand levels in the UK around the seasonal norm, however stronger Brent has helped to lift most contracts. Today's prices can also be found in an easy to read table on our 'current UK energy price' page.

Gas contracts recorded small gains yesterday as movement in the afternoon was minimal as demand levels fell and LNG supply improved. Additional LNG deliveries are expected to arrive in the UK this month as demand from other continents has fallen. The majority of near-curve power prices recorded a loss on Tuesday due to weaker demand levels and steady renewable generation. However, movement further along the curve was bullish as most contracts followed strengthening Brent.

Demand levels are forecast to increase towards the end of the week and this has offered support to near-curve prices this morning. The day-ahead contract has also been pushed higher by low storage stocks in Europe and an increase in injections will be required; European stocks currently stand at around 50% full. Day-Ahead power and the majority of the near-curve have opened at a premium this morning due to the colder weather forecast which should see a rise in consumption. Prices further along the curve have also inched higher due to an increase in gas and oil prices.

Market close data has revealed that the 1-year forward price for both commercial gas & commercial electricity increased - closing at 47.65ppt and £45.43/MWh, respectively. This can be seen in the graph below. 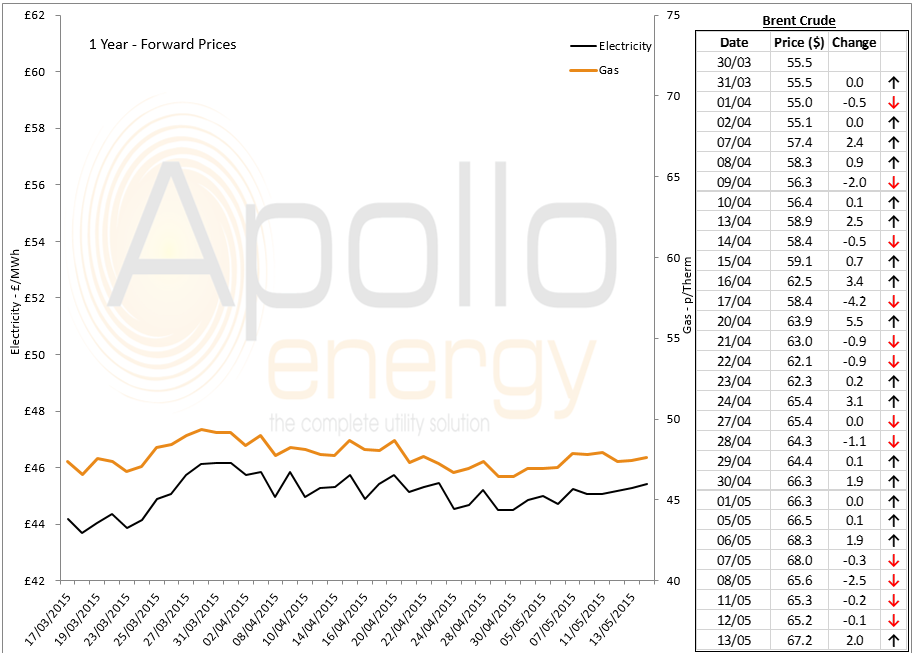 Brent 1st-nearby prices have rebounded by over $2/b and currently trade at around $67.20/b on the back of recent EIA and OPEC reports and an expected drop in US crude oil stocks.