Power prices held relatively firm yesterday as warmer weather limited the effects of reduced renewable generation. As temperatures look set to improve further it is expected to have a bearish effect on prices for the rest of the week. Gas prices move down during yesterday's trading session as European imports into the UK improved and demand levels are set to fall. UK LDZ demand is expected to drop by 9mcm today and warmer temperatures over the next few days should result in lower gas contracts this afternoon. Today's prices can also be found in an easy to read table on our 'current UK energy price' page.

Day-Ahead gas climbed 0.45ppt higher yesterday due to a short UK gas system and this upward movement was also displayed on the rest of the near curve with gains of up to 0.15ppt. Further along the curve bullish tension was also observed with Summer-15 and Winter-15 both moving 0.50ppt higher. Near-curve gas prices saw an increase with Day-Ahead closing at a £0.70/MWh premium despite an increase in wind generation today, while June-14 closed £0.60/MWh higher and July-14 rose by £0.55/MWh. A drop in nuclear generation is expected over the next few weeks which also helped towards the gains.

Gas contracts recorded losses this morning with near-curve prices falling by 0.15ppt on average. Seasonal contracts saw mixed movement as Summer-15 and Winter-15 moved in different directions. Bacton BBL flows are slightly reduced although LNG output is currently healthy. Day-Ahead power fell by £1.30/MWh and took influence from the usual drop in demand on Fridays. Most of the curve moved down as Front-Month decreased by £0.70/MWh although August-14 opened unchanged and Summer-15 rallied £0.15/MWh higher.

Market close data has revealed that the 1-year forward price for commercial gas made a small gain while commercial electricity decreased slightly - closing at 59.10ppt and £50.05/MWh,respectively. This can be seen in the graph below. 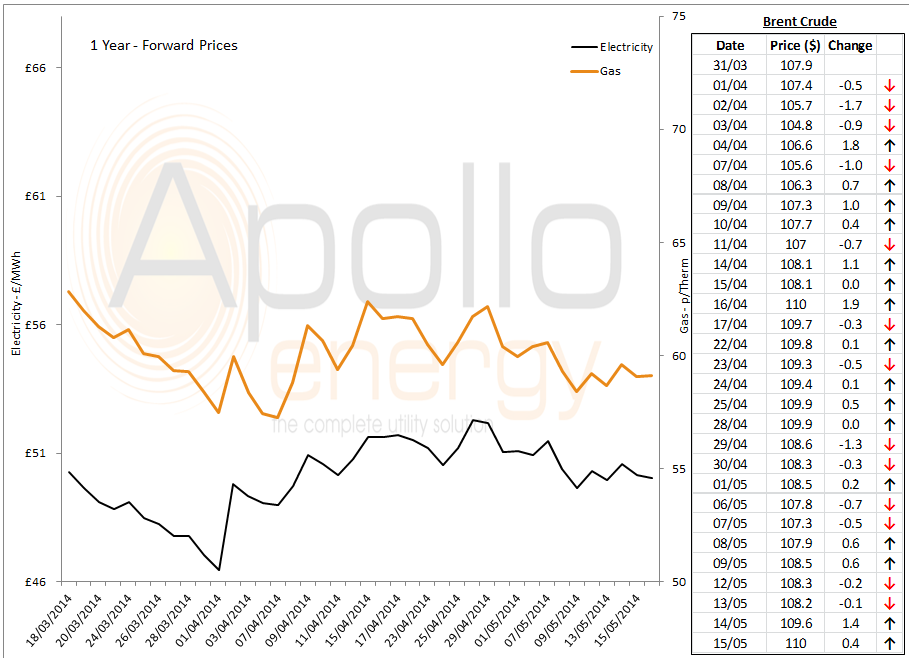 Brent 1st-nearby prices climbed $1/b higher yesterday and edged above the $110/b mark, its highest level for almost three weeks. A generally positive US stocks report failed to have much influence on the market as Ukraine continues to be the main driver.