Spot power prices moved down yesterday as wind generation levels in Germany ramped up and temperatures in the UK are set to rise. Healthy fundamentals and weaker coal prices should lead to further bearish movement this afternoon. Gas prices remained relatively stable yesterday although a weaker demand forecast has helped to weigh on near-curve prices. Today prices are expected to record losses on the back of warmer temperatures and ample LNG imports. Today's prices can also be found in an easy to read table on our 'current UK energy price' page.

Near-curve gas contracts showed little change to yesterday's figures with June-14 recording the biggest loss of 0.30ppt; further along the curve the losses were more visible with Winter-15 falling by 0.55ppt. Flows via the Bacton BBL pipeline remained low but this was countered by strong LNG send outs. The power curve followed a bearish trend similar to gas with Day-Ahead closing at a £0.15/MWh discount despite a low wind generation forecast. Losses further along the curve ranged from £0.20/MWh for July-14 to £0.50/MWh for Winter-15 with a stronger British Pound a factor.

Downward pressure continued this morning on the gas curve thanks to a long UK gas system and healthy LNG flows. Day-Ahead decreased by 1ppt and Front-Month dropped by 0.80ppt; flows via Bacton BBL doubled which provided further support to the bears. Power contracts also moved down this morning with Day-Ahead opening £0.65/MWh lower as wind generation is expected to pick up slightly tomorrow. Further along the curve some seasonal contracts took a different direction as Summer-15 added £0.15/MWh to its price.

Market close data has revealed that the 1-year forward price for both commercial gas & commercial electricity decreased - closing at 59.06ppt and £50.15/MWh,respectively. This can be seen in the graph below. 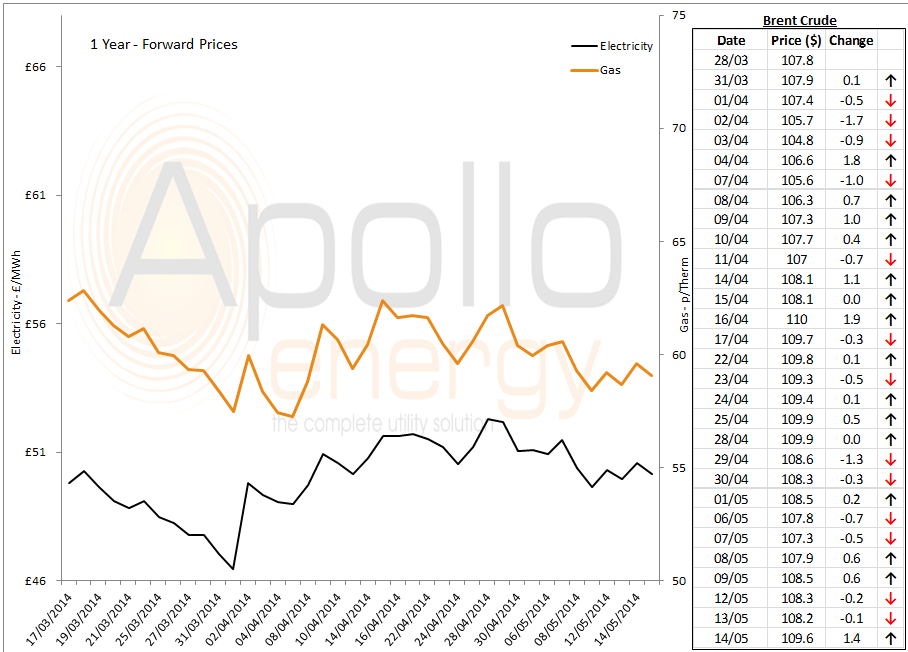 Brent 1st-nearby prices displayed a gain of $0.83/b yesterday and climbed to around $109.5/b due to weaker than expected Libyan exports and the Ukrainian situation.