Spot power prices are generally stable as consumption remains quite low despite below average temperatures. However, wind generation is still reduced across Europe and isn't expected to improve until later in the week. European gas prices recorded small gains on Friday as the UK gas system fell short due to an unplanned outage in Norway. Demand levels in the UK are set to rise by 15mcm today following a drop in temperatures, although warmer weather is set to return in the next few days; today's outlook is stable-to-bearish. Today's prices can also be found in an easy to read table on our 'current UK energy price' page.

Gas contracts moved higher on Friday afternoon as the UK gas system was undersupplied following an outage at the Norwegian Kollsnes facility and a rise in storage injections, with over 46mcm nominated to boost stocks. Power prices decreased, in contrast to gas as temperatures were expected to be above average for July; Front-Month fell by £0.05/MWh as a result. Although some downward movement on the near-curve was restricted by a cooler stint over the weekend and at the start of this week.

Gas prices have displayed only minor changes this morning despite a rise in demand levels as Norwegian flows have improved to help balance the system. Weaker Brent has offered some downward pressure on the far-curve, while a warmer weather forecast has helped to weigh on the near-curve. Power prices have also displayed little movement with an expected rise in temperatures offset by weak wind generation. Oil prices have decreased, while coal has strengthened providing mixed sentiment further along the curve.

Market close data has revealed that the 1-year forward price for both commercial gas & commercial electricity increased - closing at 46.13ppt and £44.53/MWh, respectively. This can be seen in the graph below. 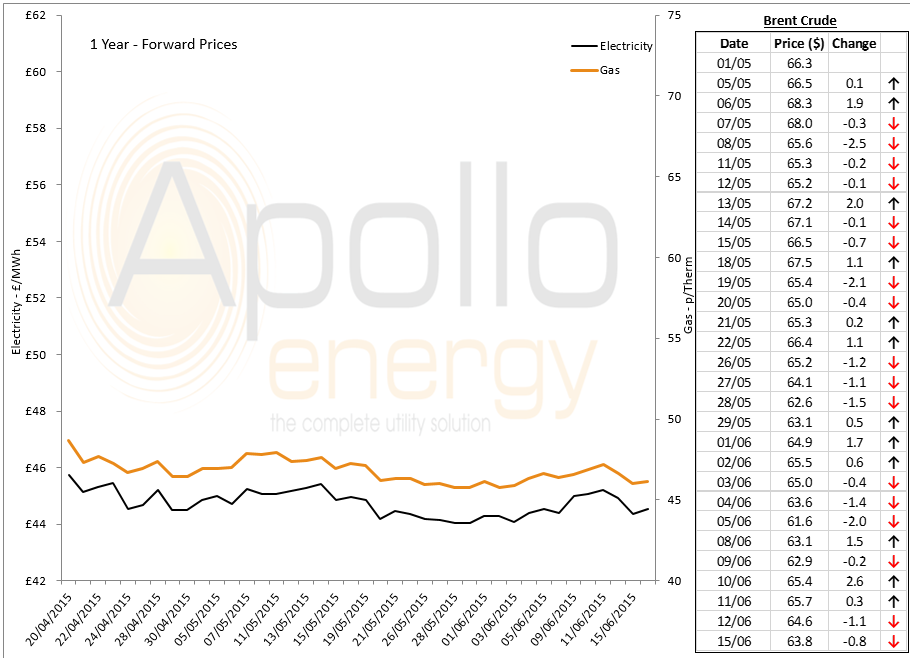 Brent 1st-nearby prices continue to fluctuate but have displayed a loss of over $1.2/b since Friday and the short-term outlook remains bearish.