UK Spot power prices opened at a loss this morning on the back of upward temperature revisions. Structural reforms to the carbon market are expected to see carbon prices amended down today.

NBP spot prices were pushed up yesterday as the UK system remained under-supplied. Further out on the curve however prices followed a bearish sentiment as a result of the Iranian nuclear deal and the anticipated technical correction. The Iranian nuclear program has been significantly restricted and select terms must be observed for up to 15 years. Sanctions on energy, transport and finance are expected to be lifted as early as 2016.

UK Gas prices rose during yesterday's session as Linepack was forecast to finish short again by 9mcm and the UK system remained under-supplied throughout the day. This was the result of high demand from the continued exertion on gas fired power stations as renewable generation remained low. Further out on the curve, contracts shed value as a deal to lift Iranian sanctions was agreed upon, opening up the potential for gas exports to Europe in the future.

The UK power curve made gains yesterday on the back of low renewable generation - solar power was at 890MW despite predictions of 1.8GW being generated. Day-Ahead contracts closed at a 3 month high yesterday, reaching £44.7/MWh. The far curve saw losses due to the further depreciation of the Euro relative to the Pound.

Gas prices opened at a loss across the entire curve this morning as support from the increased injection demand was offset slightly by the technical correction. Further out on the curve, low wind generation remains supportive. Oil prices are not expected to be supportive today so the outlook is likely to remain bearish for the rest of the day.

The UK power curve made widespread losses this morning with Day-Ahead shedding £2.45/MWh from its value. Temperatures have been revised upwards again today which may offer some support to the curve. Bearish pressure from both the coal and carbon markets is expected to weigh down the power curve later today.

Market close data has revealed that the 1-year forward price for both commercial gas and commercial electricity has decreased slightly - closing at 44.80ppt and £43.73/MWh, respectively. This can be seen in the graph below. 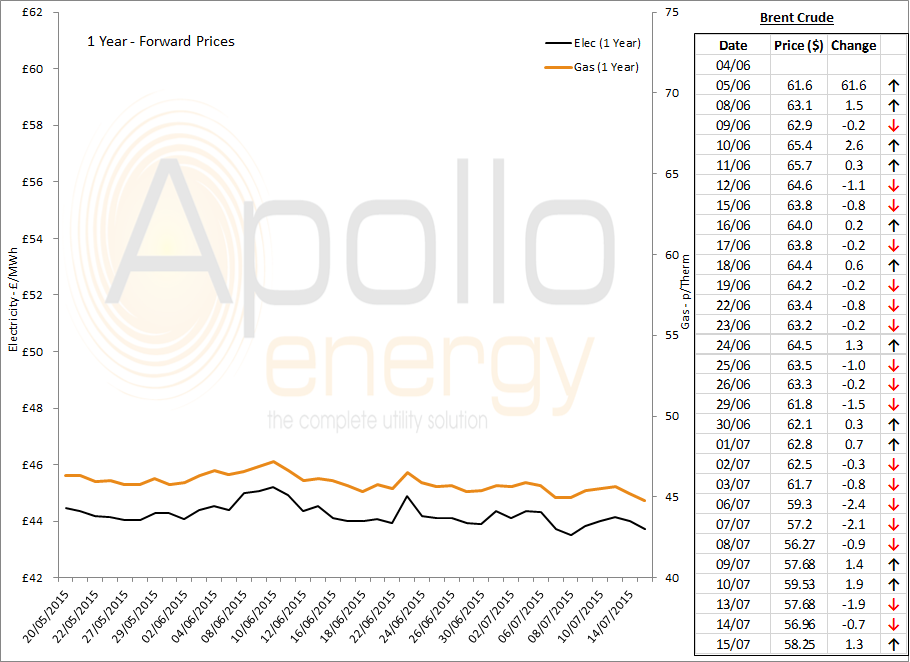 Brent Crude immediately fell in light of the nuclear deal with Iran yesterday though they have rebounded almost two dollars this morning. The market remained bullish this morning, despite the Iranian deal, due to the stronger than expected data coming out of China. Markets will now need to evaluate the impact of the Iranian deal, though consensus suggests that is will be very bearish.