UK spot prices opened relatively steady this morning as concerns over a tight market due to restricted nuclear availability, 6GW, should be eased by the expected increase in wind production. The EU Commission have presented new reforms for carbon prices which are likely to increase carbon price volatility in the mid-term - a downward revision is still expected in the short term though.

There was mixed sentiment yesterday as NBP spot prices were pushed down by a more balanced UK system but supported by lower Norwegian imports. Improved weather forecasts mean wind generation is expected to increase, leaving a bearish outlook for spot prices today.

UK gas prices remained steady yesterday as uncertainty over the Greek reforms left the market apprehensive. Demand from gas fuelled power stations remained high as wind output failed to exceed 1GW. Exports to Belgium added to the strong demand yesterday, though Linepack was stable at the end of the day as storage injection was minimal.

The UK power curve steadied yesterday after the downward trend seen on the far curve for the last two sessions. Front-Winter contracts recovered some value yesterday, after falling £0.5/MWh, due to gains in NGP gas prices. Gains were limited as the Pound reached a seven year high relative to the Euro yesterday.

UK Day-Ahead gas contracts dropped 0.25ppt this morning, with similar losses seen further out on the curve. Wind generation is expected to increase to 6GW by the end of today which is anticipated to reduce gas demand.

Market close data has revealed that the 1-year forward price for both commercial gas and commercial electricity has increased slightly - closing at 44.85ppt and £43.78/MWh, respectively. This can be seen in the graph below. 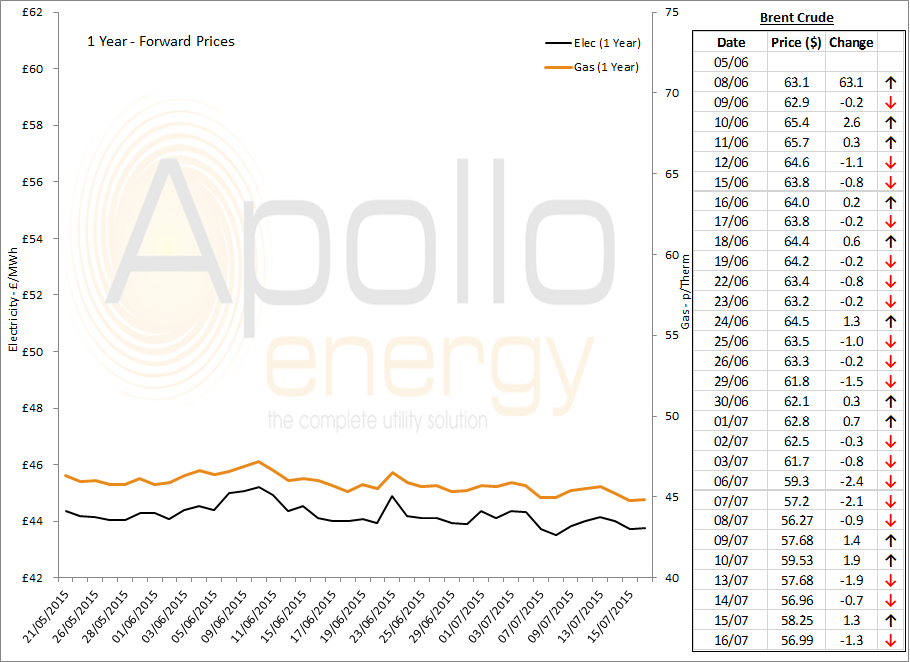 Brent Crude and WTI shed around $1.5/b yesterday as uncertainty over the extent and timeframe for the revitalisation of Iranian exports puts bearish pressure on the market. The main driver today is expected to be the European Central Bank talks on the Greek crisis.