Gas prices increased on Friday as supply levels were rather weak, although milder weather is expected this week which curtailed some gains. A further increase is expected this afternoon as Linepack has opened short and gas flows remain low. Most power prices moved down on Friday and were influenced by a healthier renewable generation forecast for today. However, bullish sentiment was displayed across the curve this morning with further gains expected on the back of the anticipated drop in wind production for tomorrow. Today's prices can also be found in an easy to read table on our 'current UK energy price' page.

Gas contracts moved higher on Friday following a reduction in output in a number of European countries. A warmer weather forecast and a healthy supply outlook restricted the bulls on the near-curve somewhat but most contracts still increased in price. Storage levels remained at 97% with two LNG deliveries expected to arrive this week, limiting near-curve gains further. Day-Ahead power added £0.55/MWh to its price and took direction from the usual rise in demand on Mondays, ignoring an improved wind production forecast. The rest of the curve followed a downward trend with impetus coming from strong supply.

Near-curve gas prices displayed large gains this morning with Day-Ahead opening at a 3ppt premium. The UK gas system opened 26mcm short and was the main contributor to the bullish movement. Smaller gains were observed on the far-curve with contracts moving 1ppt higher on average. The power curve mirrored gas and opened the session with strong gains with Day-Ahead climbing £2.90/MWh higher as wind generation is set to decrease tomorrow. In terms of the fuel mix, coal-fired generation holds a 27% share and wind generation's share is at 5%.

Market close data has revealed that the 1-year forward price for both commercial gas & commercial electricity climbed higher - closing at 58.88ppt and £51.35/MWh, respectively. This can be seen in the graph below. 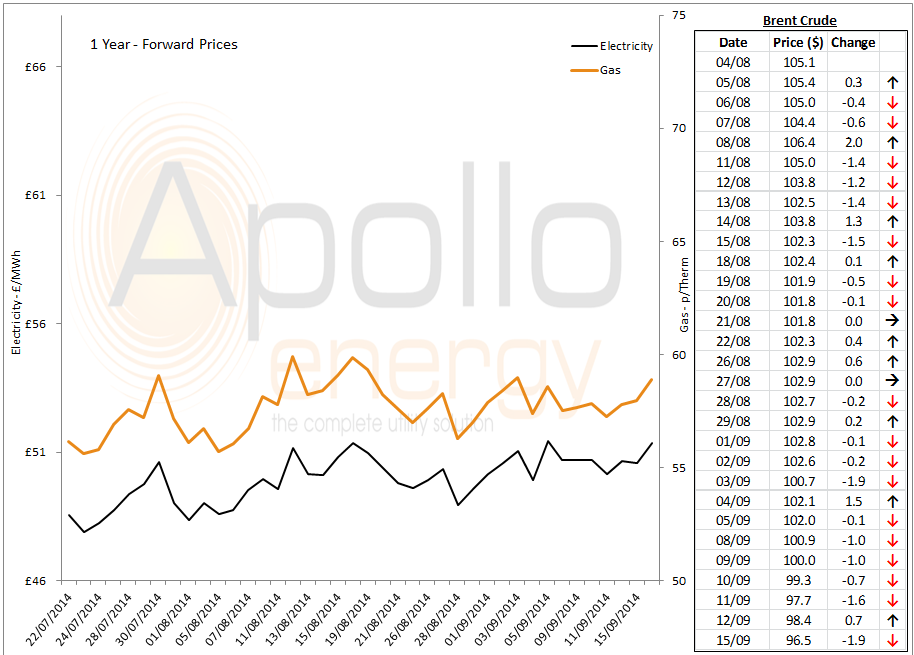 Brent 1st-nearby prices decreased over the weekend and currently trade at $96.54/b, a drop of $1.86/b since Friday with direction coming from healthy supply and a low demand forecast.