Spot power prices have increased this morning as nuclear availability in France is low and wind generation levels are expected to fall across Europe; peak levels are not expected to exceed 15GW today. Gas prices were rather bearish yesterday morning as demand levels were slightly reduced and a number of LNG deliveries were scheduled to arrive in Europe in the next few days. Today the market once again awaits news from Groningen, resulting in gains; however, downward movement is likely if production at the facility remains unchanged. Today's prices can also be found in an easy to read table on our 'current UK energy price' page.

Gas prices recorded losses yesterday morning but strengthened as the session progressed as the UK gas system fell short due to weak output from Norway and Holland. An increase in LNG flows and higher storage withdrawals helped to make up for this drop in supply but failed to curb the gains. As has been the case for most of the week, power prices once again followed the movement of gas, initially opening at a discount before posting gains in the afternoon. Overall supply levels were generally healthy despite lower nuclear availability.

Weak supply continues to push prices higher this morning as the market ignored weaker demand and falling Brent. Traders also await news from Holland as an announcement is expected at 2pm, confirming whether output at the Groningen facility will be reduced further. Warmer temperatures are expected over the weekend but this had little effect on power prices as most contracts were influenced by stronger gas and a weaker supply picture. Some bearish pressure was provided by the postponement of maintenance at UK coal plants as well as a substantial loss for Brent.

Market close data has revealed that the 1-year forward price for both commercial gas & commercial electricity increased - closing at 48.70ppt and £45.75/MWh, respectively. This can be seen in the graph below. 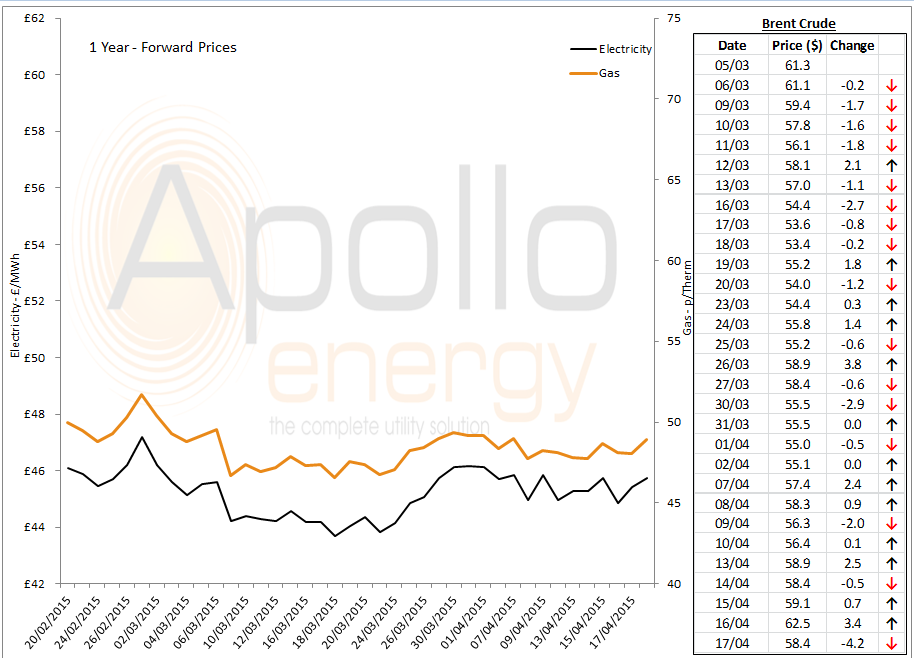 Brent 1st-nearby prices encountered another volatile session yesterday with strong movement in either direction but recorded a significant loss of over $4/b overnight. Brent currently trades at $58.36/b with strong US retail data a market driver.