Spot power prices were generally stable yesterday with no clear market driver, however, the bulls could seize control of the curve in the coming days as renewable generation is expected to drop slightly and cooler temperatures are anticipated next week. Gas prices moved higher yesterday following a series of losses on Tuesday on the back of a colder weather forecast and scheduled maintenance at gas facilities. The expected drop in temperatures continues to push prices higher this morning, while European supply remains quite low. Today's prices can also be found in an easy to read table on our 'current UK energy price' page.

The gas curve followed an upward trend on Wednesday with rising Brent, on the back of weaker US oil production and concerns regarding Yemen offering support. Norwegian supply also remained at low levels due to maintenance at the Kollsnes facility. Power prices once again followed the movement of gas yesterday morning and moved higher. Like gas prices, power contracts also displayed small losses in the afternoon as the UK is unlikely to be affected by reduced output from the Dutch Groningen facility. Meanwhile, Day-Ahead power took direction from an expected drop in wind generation and closed at a premium.

Near-curve gas prices have moved down this morning with maintenance at the Kollsnes facility expected to conclude today, although Summer-17 was the exception to the losses. Elsewhere, rising fuel prices helped to restrict the losses further along the curve. Power prices are on the rise this morning as a colder weather outlook and a drop in renewable generation helped the bulls prevail. Stronger Brent provided support to the far-curve but the prompt contract managed to record a loss due the usual drop in demand on Fridays.

Market close data has revealed that the 1-year forward price for commercial gas decreased slightly while commercial electricity displayed a gain - closing at 48.08ppt and £45.43/MWh, respectively. This can be seen in the graph below. 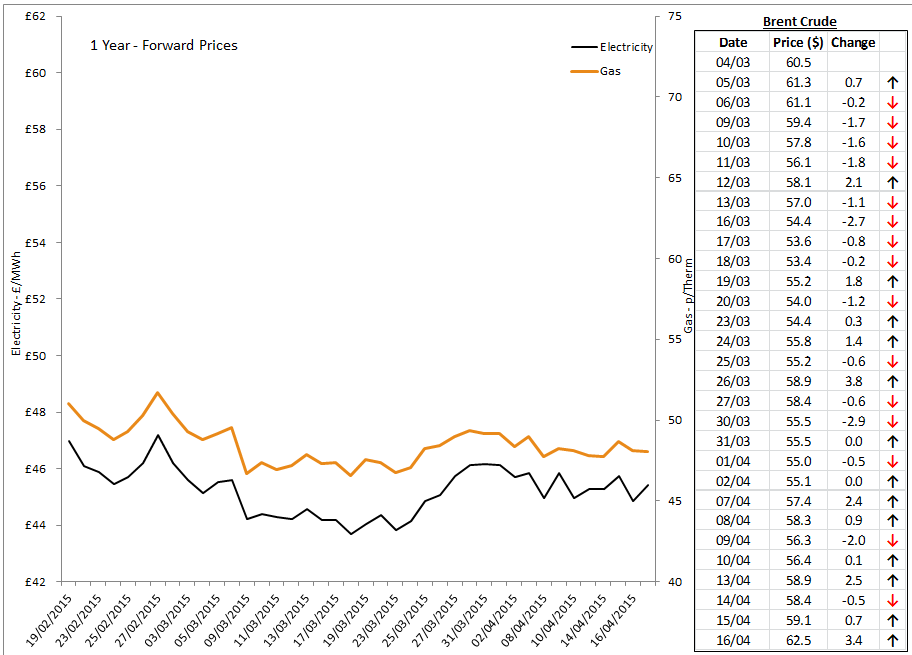 Brent 1st-nearby prices recorded a significant gain yesterday and currently trade above $62.50/b. The recent EIA report was the main driver of oil prices as it displayed only a minimal rise in crude stocks and another drop in US production.