Rising nuclear capacity and a stronger renewable generation outlook has helped to weigh on power prices, with the help of below-average demand. Renewable production is expected to maintain its current levels tomorrow, while nuclear generation continues to improve in France; prices are expected to stabilise as a result. Gas prices strengthened during yesterday's session as the UK gas system opened short for the second consecutive session following a drop in Norwegian flows. The supply picture is expected to improve today and Russian gas flows into Europe are slowly returning to normal; a further price-drop is anticipated. Today's prices can also be found in an easy to read table on our 'current UK energy price' page.

Gas prices fluctuated during yesterday's session but ended with most contracts displaying a loss. Front-Month fell by 1.00ppt, while Front-Season dropped by 0.80ppt as the UK gas system remained short. Despite this, overall gas flows were largely improved with South Hook output at 28mcm and Holford withdrawals also higher. The power curve followed a downward trend similar to gas after a morning of bullish movement. Q1-15 was the session's biggest mover with a loss of £1.25/MWh, while Day-Ahead fell by just £0.10/MWh.

Mixed movement was displayed on the gas curve this morning, opening with minimal changes either way. The UK gas system was 8mcm short despite an increase in gas flows of 19mcm and gas storage levels remaining at 97%. Improved wind generation levels are expected for Thursday which has helped to weigh on the Day-Ahead contract. Further along the curve most contracts ignore stronger Brent and took direction from falling carbon contracts. In terms of the generation mix the current shares stand as follows; coal (39%), gas (33%) and nuclear (18.8%).

Market close data has revealed that the 1-year forward price for both commercial gas & commercial electricity decreased - closing at 58.23ppt and £50.73/MWh, respectively. This can be seen in the graph below. 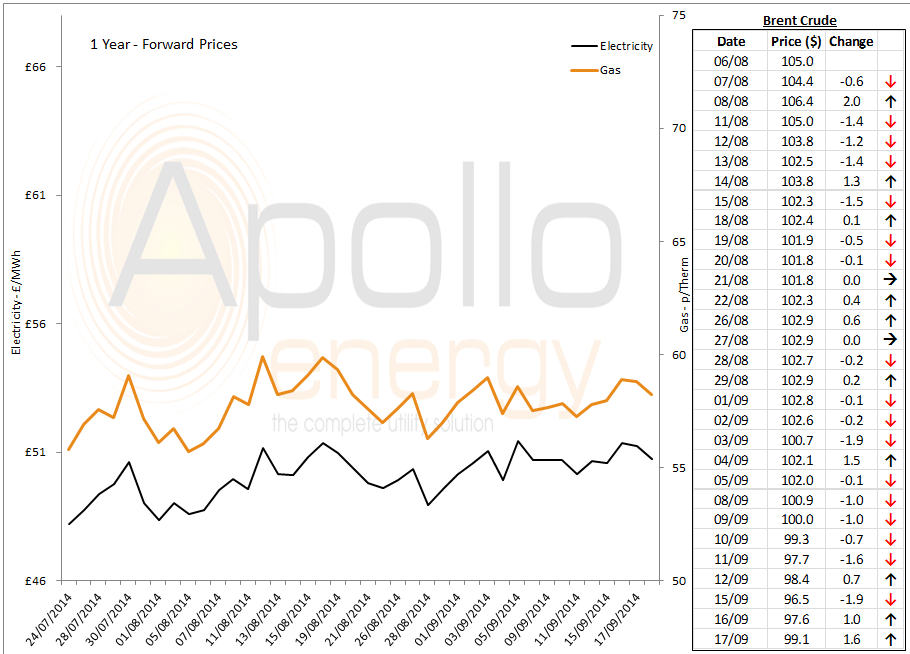 Brent 1st-nearby prices displayed strong gains yesterday following a sustained downward trend in the last few weeks. News of short term supply cuts due to troubles in the Middle-East have supported prices and Brent now trades above $99/b.