Power prices were pushed higher yesterday as warmer temperatures on the continent have resulted in higher demand due to extra cooling measures being taken. Tomorrow's renewable generation forecast shows a considerable drop in wind production over the weekend; this should lead to a further price increase. The UK gas system initially opened short but grew in length by the afternoon following an increase in flows which supported the bears on the near-curve. A rise in Norwegian flows has been countered by Russian supply concerns and an expected drop in temperatures over the weekend which should result in gains this afternoon. Today's prices can also be found in an easy to read table on our 'current UK energy price' page.

Gas contracts decreased yesterday as overall supply levels improved and demand eased. The UK gas system ended the session long and above average temperatures further weighed on contracts. Two LNG deliveries are expected to arrive in the UK before the end of the month which have been infrequent over the summer period. Power prices followed their gas counterparts on Wednesday except for Day-Ahead which climbed £0.55/MWh higher with weak renewables a factor. Contracts fell by £0.30/MWh on average as a weaker British Pound restricted the downward movement.

Day-Ahead gas opened 0.95ppt higher this morning and trades just below 50ppt as the UK gas system opened 10mcm short, with BBL flows dropping to 0mcm. Gains were displayed across the curve with Front-Month adding 0.65ppt to its price and seasonal contracts also moving higher. The majority of power contracts opened at a premium this morning with Day-Ahead the only contract to record a loss; falling by £0.80/MWh on the back of higher wind generation tomorrow. Further along the curve October-14 was the biggest mover with a gain of £0.75/MWh as output via the Dutch Interconnector was low.

Market close data has revealed that the 1-year forward price for commercial gas decreased while commercial electricity kept its price - closing at 58.13ppt and £50.73/MWh, respectively. This can be seen in the graph below. 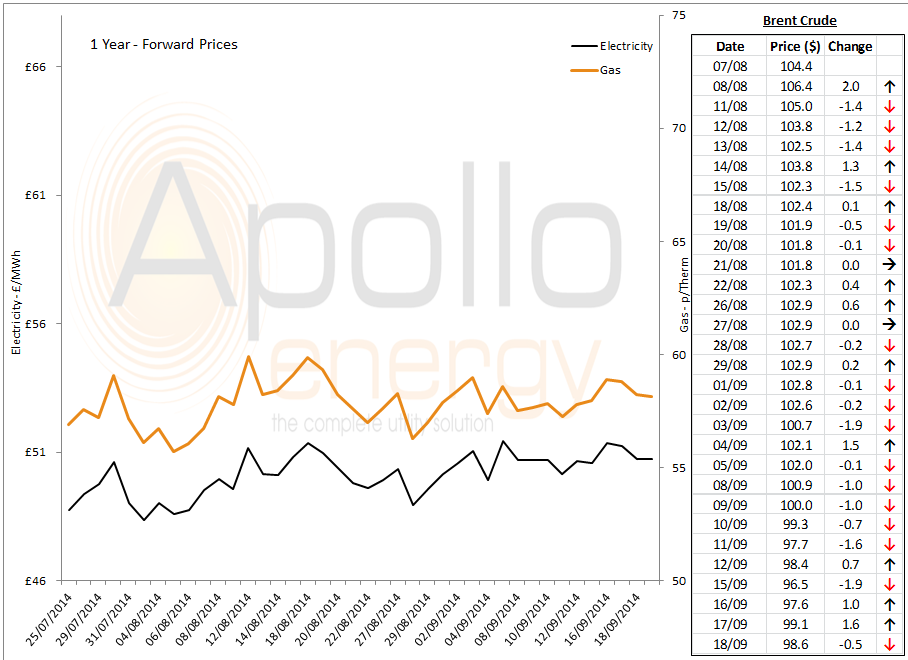 Brent 1st-nearby prices recorded a small loss of $0.08/b yesterday and finished trading just below $99/b on the back of poor demand figures and healthy supply. A further drop is anticipated for today but the markets will wait on the result of the Scottish Independence vote and news on Libyan production.