Gas prices moved higher yesterday as demand levels were stronger than previous days and improved Norwegian output was ignored. Norwegian flows have decreased to normal levels today as the outage at a French terminal has been resolved. Despite this, the system remains balanced as demand levels are 20mcm lower and this morning's gains could be erased in the afternoon.
Today's prices can also be found in an easy to read table on our 'current UK energy price' page.

Gas prices increased on Wednesday with strong demand and rising oil prices the main bullish factors. UK demand levels grew to around 215mcm yesterday, 15mcm higher than Tuesday with colder temperatures and an extra reliance on gas-fired generation the cause.

Gains could be observed across the power curve yesterday as cold overnight temperatures will keep residential demand high. Stronger gas also helped to push contracts higher, with the help of Brent which recorded a significant increase. An expected drop in wind generation today also helped to support the prompt.

Gas contracts moved higher this morning on the back of stronger oil but today's outlook is stable-to-bearish as the system is comfortable despite a slight drop in Norwegian flows via the Langeled pipeline. The system is balanced as lower exports to Belgium has reduced demand levels by around 20mcm.

Warmer weather is expected to arrive in the UK at the end of the week which should see demand levels decrease; helping Day-Ahead power shed £0.30/MWh from its price this morning. Wind generation is also set to improve which has helped to weigh on the prompt further, with losses evident across the near-curve, however, another rise in Brent has helped to support far-curve contracts.

Market close data has revealed that the 1-year forward price for commercial gas increased, while commercial electricity recorded a small loss - closing at 42.03ppt and £42.50/MWh, respectively. This can be seen in the graph below. 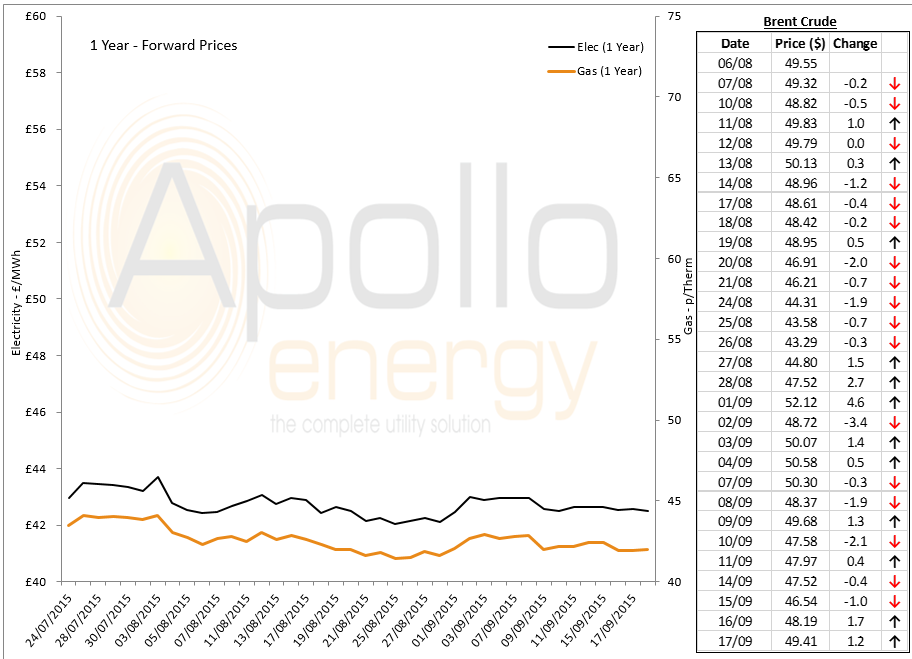 Brent 1st-nearby prices have strengthened as the recent EIA report has confirmed that US crude stocks have decreased.