Gas prices closed at a discount yesterday despite a rise in demand levels, with increased supply from Norway helping to weigh on the near-curve. Norwegian flows were 15mcm higher than Monday's levels but the system remained short, although this had little effect on prices. An improved weather forecast helped some contracts record a loss, with help from a strong LNG outlook.

Most power contracts increased yesterday as the market prepares for a rise in demand over winter. Day-Ahead rose to its highest price since July, while Front-Month also rallied higher. Although temperatures have been revised higher, they will remain below average overnight, resulting in higher residential demand; weaker gas and Brent did little to restrict the bulls.

The UK gas system is balanced this morning and temperatures are generally unchanged but despite this, near-curve contracts climbed higher due to a rise in exports. A French terminal has suffered an outage which has resulted in flows being re-directed to the UK, however, exports are 10mcm higher than yesterday.

Power prices have moved higher this morning as renewable generation has weakened, while two nuclear power plants in the UK are set to go offline, resulting in an increased reliance on gas-fired generation. A 580MW unit at Heysham is expected to go offline for 7 weeks with a 525MW unit at Dungeness B expected to be taken offline on Friday.

Market close data has revealed that the 1-year forward price for commercial gas was unchanged, while commercial electricity increased slightly - closing at 41.93ppt and £42.56/MWh, respectively. This can be seen in the graph below. 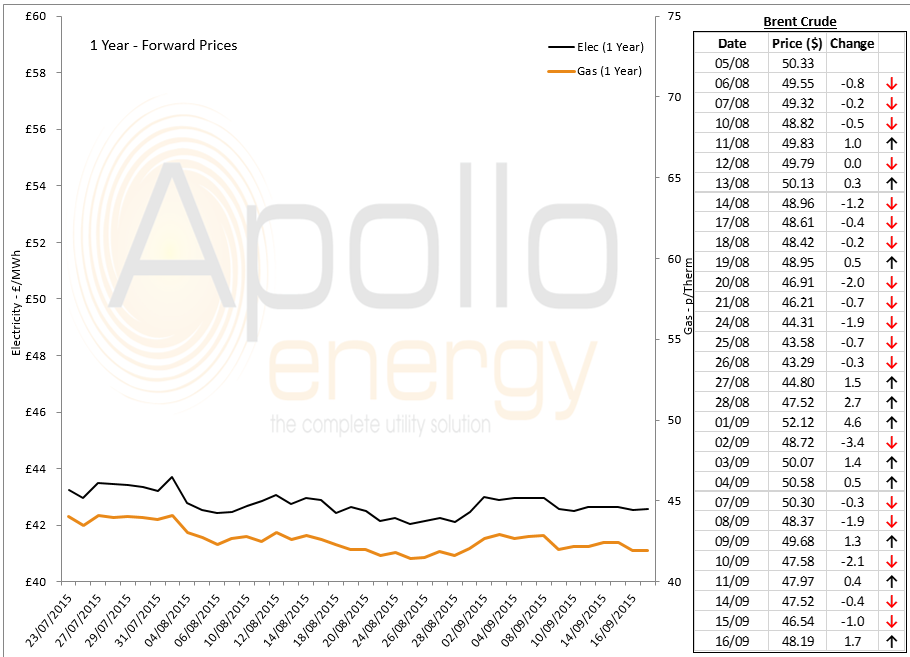 Brent 1st-nearby prices have increased this morning following the expiration of the October contract, with a drop in US crude stocks also a supportive factor.