Lower demand levels and a forecast of milder weather for the rest of the week offset any bullish pressure caused by a drop in nuclear availability, as a result power prices are not expected to move higher today but there is little to suggest prices will decrease much. Gas prices strengthened yesterday due to a reduction in storage withdrawals and prices have continued their bullish trend today as there has been no improvement in terms of supply. Today's prices can also be found in an easy to read table on our 'current UK energy price' page.

Gas prices moved higher yesterday despite the milder weather forecast as withdrawals from the Aldbrough facility dropped to 0mcm. Day-Ahead climbed 0.05ppt higher as the system ended the session around 2mcm short. The power curve also displayed upward movement with Day-Ahead strengthening in price on the back of a reduced wind generation forecast and a drop in nuclear availability following an outage at a power plant. Front-Season closed at a £0.85/MWh premium while other seasonal contracts took influence from their gas counterparts.

Gas contracts posted small gains this morning as Day-Ahead added 0.10ppt to its price and Winter-14 increased by 0.35ppt. The UK system opened 4mcm long despite a drop in gas flows following Aldbrough's return to injection mode and a decline in BBL output. Gains on the far-curve were more minimal as Brent began the session unchanged. Day-Ahead power was one of the only contracts to record a loss this morning as it decreased by £1.10/MWh despite lower wind generation forecast for tomorrow. Carbon allowance prices also edged higher following over-supply concerns while coal currently holds the largest share of the generation mix.

Market close data has revealed that the 1-year forward price for both commercial gas & commercial electricity moved higher- closing at 62.37ppt and £49.93/MWh, respectively. This can be seen in the graph below. 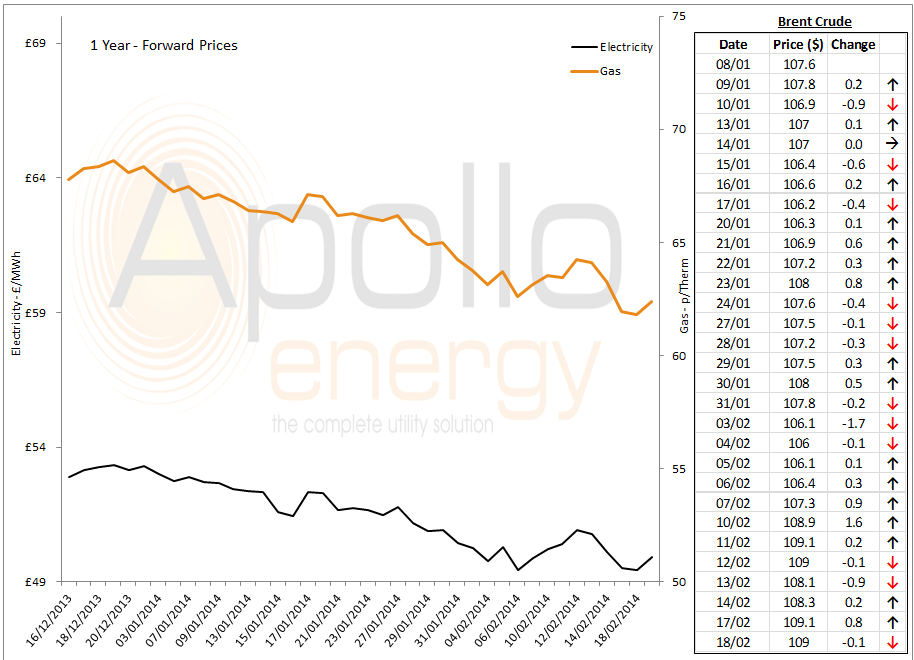 Brent 1st-nearby prices were indecisive yesterday and ended the session almost unchanged, meanwhile there was no trading for WTI in the US as the market was closed for President's day.