Spot power prices have decreased slightly as supply levels are healthy and temperatures for the rest of the month are forecast to be mild. However, rising carbon prices and weaker than anticipated wind levels could lead to bullish movement today. Gas prices also took direction from the expected rise in temperatures, moving lower on Friday and should fall again today on the back of healthy fundamentals. Today's prices can also be found in an easy to read table on our 'current UK energy price' page.

The gas curve displayed a series of gains by the end of yesterday's session as both Day-Ahead and Front-Month climbed 0.35ppt higher. Further along the curve the price gains were slightly smaller with Summer-14 rising by 0.15ppt and Winter-15 increasing by 0.25ppt. A few contracts failed to register any movement as lower demand levels restricted the bulls. Day-Ahead power was one of the only near-curve contracts to close at a premium on Friday as most contracts made a loss. On the far-curve prices mirrored their gas counterparts and climbed higher; stronger carbon prices also offered support.

Movement on the gas curve this morning was minimal with some contracts making a small loss. Milder temperatures and lower demand continued to weigh on prices although some contracts were unchanged at the start of the session. The withdrawal rate at the Aldbrough facility was 56mcm this morning but soon fell to 19mcm; gas storage levels are currently at 58%. On the power curve Day-Ahead opened £1.40/MWh higher as wind generation is expected to fall by 50% tomorrow. The majority of prices displayed an upward trend as stronger coal and Brent prices were the main market drivers further along the curve.

Market close data has revealed that the 1-year forward price for both commercial gas & commercial electricity moved decreased- closing at 61.82ppt and £49.48/MWh, respectively. This can be seen in the graph below. 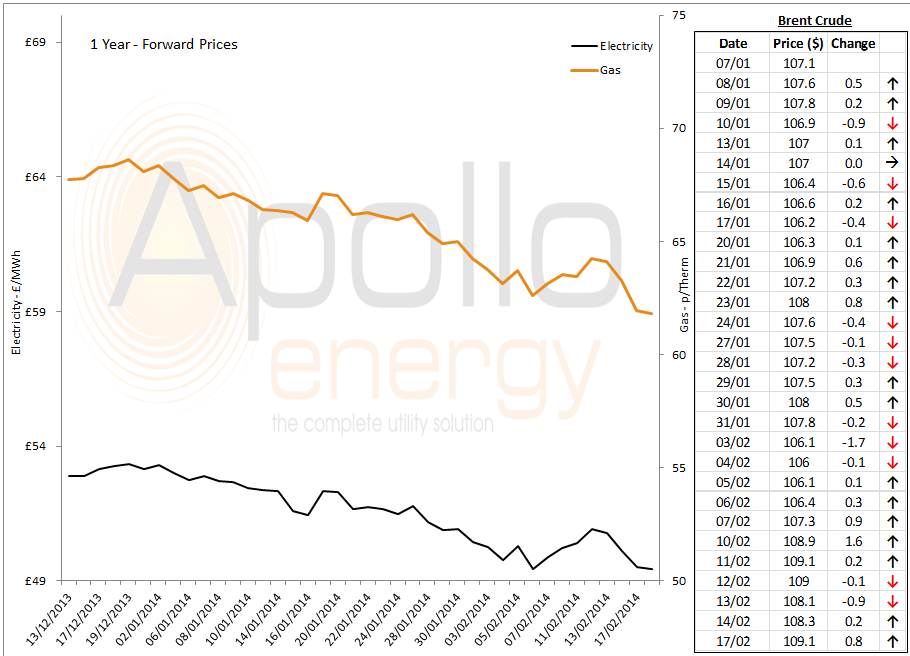