Spot power prices have moved down today following a drop in French nuclear generation and wind production has not increased as initially expected. Energy Market Analysis - 18-02-2015 Demand levels remain lower on the back of milder temperatures but the outlook for today is bullish. Gas prices moved down yesterday on the back of the strong demand/ supply picture following an uptick in overall gas flows and improved temperatures. European flows remain stable today but a drop in Norwegian imports entering the UK and lower BBL flows has supported prices and further increases are likely. Today's prices can also be found in an easy to read table on our 'current UK energy price' page.

Gas prices continued to decrease during Tuesday's session on the back of an over-supplied UK gas system following a drop in demand. Day-Ahead recorded the largest decrease but the losses further along the curve were less visible. An LNG delivery arrived at South Hook yesterday afternoon with an additional delivery expected next week. Near-curve power prices moved down with influence coming from weaker gas and milder temperatures. However, the downward movement did not filter through to the rest of the curve with some support coming from a stronger US Dollar.

Gas prices have displayed a rebound this morning following a drop in overall gas flows; however demand levels remain lower than they were a week ago. Some bearish pressure was provided by weaker coal and oil but the majority of contracts moved higher. Power prices followed gas with additional influence coming from weaker generation as wind production remains low and nuclear availability is reduced. Day-Ahead was one of the few contracts to shed from its price with lower demand the market driver.

Market close data has revealed that the 1-year forward price for both commercial gas & commercial electricity increased - closing at 51.00ppt and £46.98/MWh, respectively. This can be seen in the graph below. 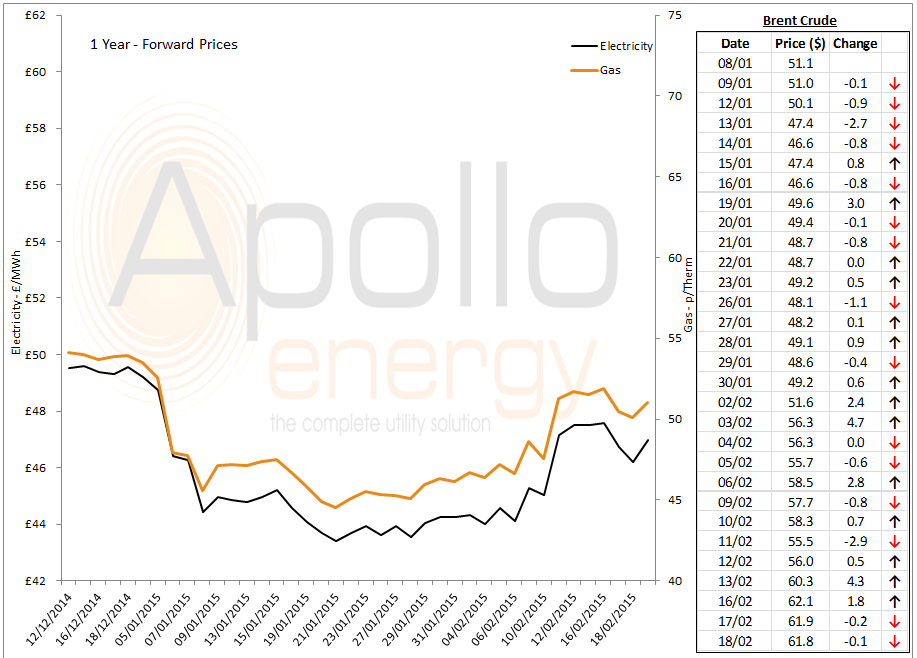 Brent 1st-nearby prices have recorded a loss of $0.15/b and currently trade at $61.78/b but upward movement is likely later in the week, with upward direction possibly coming from Libyan supply concerns, on-going tension in Ukraine and conflicts in the Middle East.