Spot power prices remain quite low despite yesterday's gains and today's outlook is generally bearish as temperatures are set to remain mild across Europe and wind generation is expected to improve. Gas prices opened higher yesterday but weakened as the session progressed on the back of a strengthening British Pound and a balanced UK gas system. Above average temperatures are forecast for March, while supply levels are steady despite another outage in Norway. The UK gas system has opened long and further LNG deliveries are scheduled to arrive this month which has weighed on prices. Today's prices can also be found in an easy to read table on our 'current UK energy price' page.

The majority of gas prices decreased during Wednesday's session as a stronger British Pound helped to weigh on front-month and seasonal contracts. Oil prices also moved down which provided bearish pressure further along the curve. Meanwhile, an LNG delivery which was expected to arrive in the UK on the 25th of February has been redirected to Canada. Power prices were weaker by the end of trading yesterday and took direction from their gas counterparts, lower demand and an improved wind generation forecast. Day-Ahead and front-month contracts were the session's biggest movers with smaller losses observed on the far-curve.

Gas prices have continued to move down today as despite an outage at a Norwegian gas facility, overall gas flows are healthy and demand levels are reduced. Weakening Brent and coal have also provided bearish pressure to far-curve contracts. Power prices have decreased with direction coming from a strong supply/ demand picture. The milder weather is expected to remain for the time being and a revised forecast predicts above average temperatures for the start of March.

Market close data has revealed that the 1-year forward price for both commercial gas & commercial electricity decreased - closing at 49.98ppt and £46.10/MWh, respectively. This can be seen in the graph below. 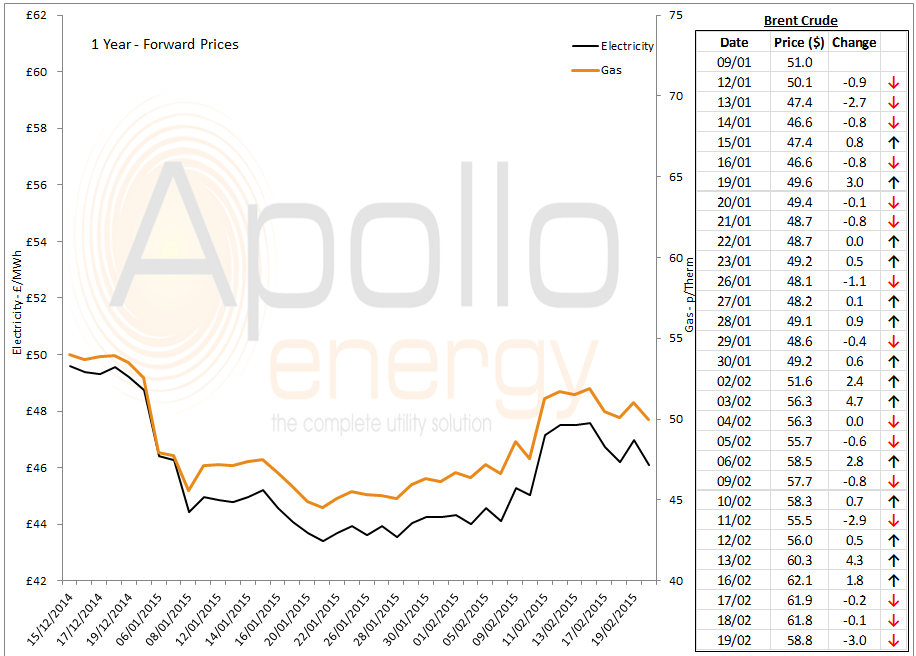 Brent 1st-nearby prices have displayed a significant drop of around $3/b and trade below $59/b; higher expectations in regards to US stock levels were the main market driver.