Spot prices saw a considerable drop yesterday with nuclear availability in France around 1GW higher and German wind generation will be in excess of 10GW day-on-day. Hydro production in France is also high and could continue to look healthy as the snow melts.

Day-Ahead gas fell by 0.65ppt and Front-Month saw a loss of 0.80ppt as the improved weather temperatures had an effect on prompt prices. Gas flows via the South Hook and St-Fergus terminals were improved and the falling Brent-Prices also had an impact on gas prices. Power prices remained bearish across the curve due to the vote against back-loading and the downward trend of Front-Month Brent. Day-Ahead and July-13 showed no change but the seasonal contracts saw drops of over £0.45/MWh.

Day-Ahead gas was at its lowest point in two months while most of the other contracts saw no change, Winter-15 dropped by the biggest margin falling by 0.40ppt. The LNG outlook remains positive as four more deliveries are expected to arrive in late April but the Brent demand growth outlook doesn't look good as prices continue to fall. Day-Ahead power saw a rise of £2.10/MWh and opened at £49.25/MWh even though wind generation is expected to increase. Front-Month shed £0.30/MWh and followed a similar trend to Front-Month Brent. The Hunterson power station will have reduced output until Sunday which has resulted in lower nuclear availability in the generation mix.

Market close data has revealed that the 1-year forward price for commercial gas made a small rise and commercial electricity dropped once again - closing at 68.22ppt and £52.34 respectively. This can be seen in the graph below. 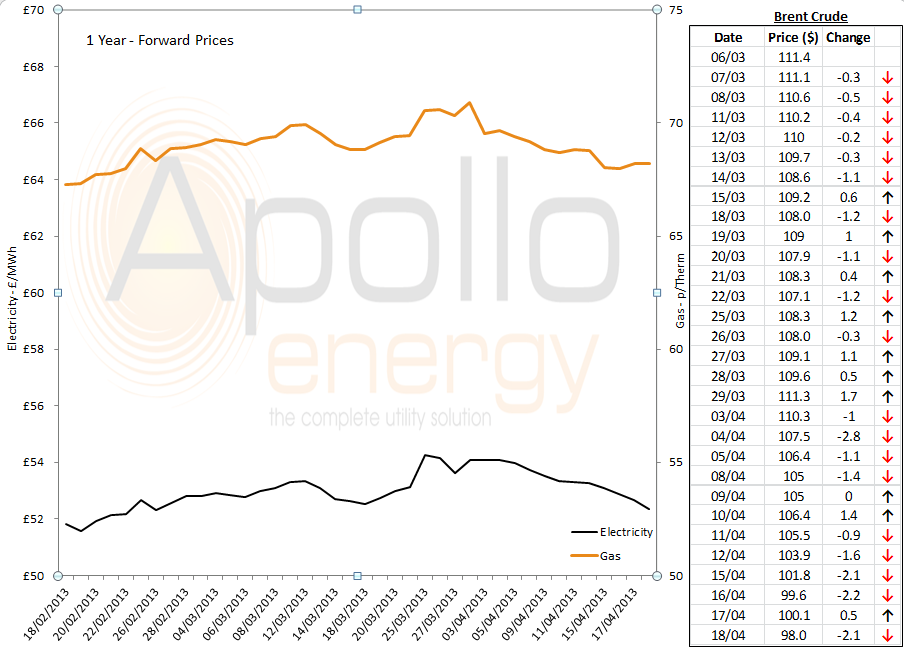