Day-Ahead gas closed 0.05ppt down due to the warmer weather and improving storage levels with stocks rising to 6%. Front-Month gained 0.16ppt as the forecast for the rest of April predicts colder weather. Power prices along the curve made small losses, all except June-13 which kept its price, May-13 fell by £0.40/MWh and Summer-14 & Summer-15 made the largest losses of £0.55/MWh. The prices have been affected by the EU Parliament's decision to say no to the back-loading proposal.

NBP contracts remained largely unchanged from their closing prices and  didn't  follow the bearish trend that Brent prices are currently showing. The system opened up at 16mcm long even though Norwegian flows via the St Fergus total terminal were lower than usual this morning, meanwhile the Bacton inter-connector was put into export mode. There was varied movement along the curve today with Day-Ahead dropping by £0.35/MWh as a consequence of high wind availability. Wind generation is forecast to be over 4.9GW at its peak tomorrow which would be a record seasonal high. The rejection of the back-loading proposal also led to seasonal contracts making slight gains.

Market close data has revealed that the 1-year forward price for commercial gas has gone up slightly and commercial electricity has showed a small drop - closing at 68.21ppt and £52.66 respectively. This can be seen in the graph below. 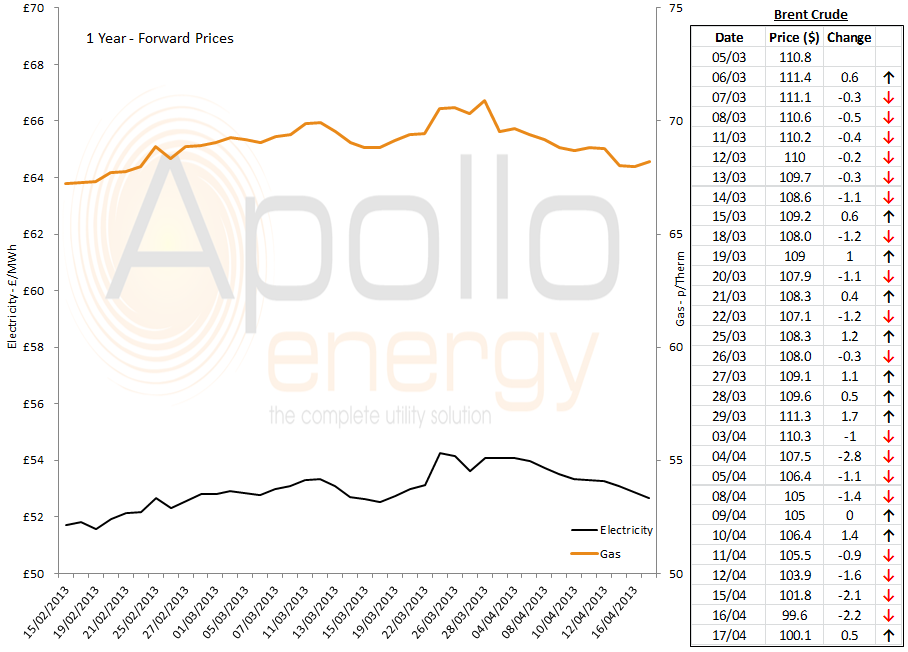 Brent 1st nearby prices went up yesterday after hitting 98 $/b earlier in the morning before closing below 100 $/b, their lowest closing price since July 2012. The International Monetary Fund downgraded their forecast figures for global economic growth in 2013 & 2014. The changes in terms of oil are as follows; Crude -6.7Mb, distillate +0.3Mb and Crude Imports -1.5Mb/d.