Spot power prices are set to rise over the coming days due to below average weather, resulting in a higher demand forecast. In addition to an increase in demand, wind and solar generation is set to remain low, increasing the UK's reliance on coal and gas-fired generation. Gas prices moved higher on Friday due to the colder weather forecast for this week and scheduled maintenance work in Norway. Prices are set to increase this afternoon as demand levels are 18% above the seasonal norm today, resulting in a tight UK gas system despite slightly improved Norwegian supply. Today's prices can also be found in an easy to read table on our 'current UK energy price' page.

Day-ahead gas and the rest of the near-curve recorded gains on Friday due to weak fundamentals. Norwegian gas flows are set to fall this week due to maintenance work which was the main contributing factor to the upward movement. However, far-curve contracts were bearish despite rising oil prices as an expected influx of LNG deliveries offered downward pressure. Power prices followed their gas counterparts on Friday with June-15 erasing its losses from earlier in the week to close at a premium. Day-Ahead moved higher as a result of a weaker wind generation forecast, while the gains were not as prominent further along the curve due to comfortable gas storage.

Day-Ahead gas has climbed higher this morning as temperatures are set to remain below average tomorrow, keeping demand levels well above average. Further along the curve the movement was less visible due to a healthy LNG outlook. Power prices once again tracked the movement of gas and displayed a bullish trend at the start of today's session. A weak renewable generation forecast and cooler weather has helped to support the majority of contracts, with a slight increase in oil prices also providing support.

Market close data has revealed that the 1-year forward price for both commercial gas & commercial electricity decreased - closing at 47.13ppt and £44.85/MWh, respectively. This can be seen in the graph below. 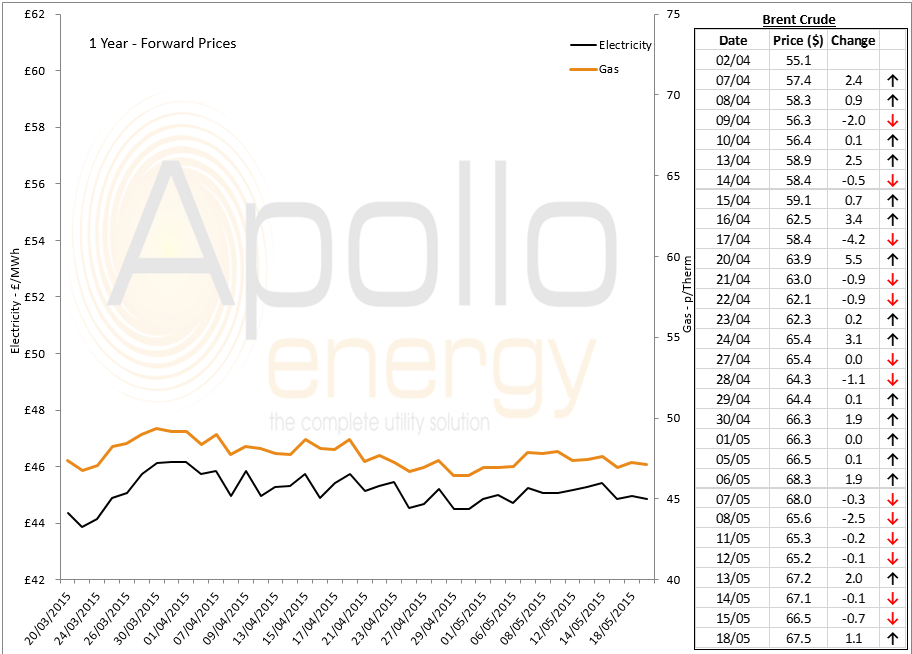 Brent 1st-nearby prices have shown very little movement in the last three sessions and remain at around $67/b, although some bullish pressure has been provided by fresh conflicts in Yemen.