Spot power prices have displayed sizeable losses following the amendment of the German carbon tax levy which will see emissions reduced from 22Mt/year to 16MT/year, which will result in increased biomass production. This has lowered carbon prices which has transferred to the power curve. Gas prices moved higher yesterday due to an increase in demand as a result of colder weather across the UK. The UK gas system has opened long this morning as storage withdrawals and LNG send-outs have more than made up for a drop in Norwegian supply; bearish movement can be seen across the curve. Today's prices can also be found in an easy to read table on our 'current UK energy price' page.

Day-Ahead gas climbed higher yesterday as scheduled maintenance in Norway is expected to restrict any output via the Langeled pipeline, significantly reducing supply into the UK. Colder weather helped to limit downward movement on the near-curve with demand levels set to remain well above average this week. However, movement on the far-curve was bearish in the afternoon as contracts followed falling Brent. In terms of power, movement on the far-curve was similar to gas and most contracts posted a loss due to weaker oil prices. The prompt contract also shed from its price as forecasts for wind generation and nuclear production were revised higher. A healthier supply outlook for next month also helped to pressure down June-15.

Norwegian maintenance has had little effect this morning as an increase in LNG send-outs and storage withdrawals have helped towards a comfortable UK gas system. Brent has also weakened further and price-drops are visible across the gas curve. Healthier generation levels have offset above average demand this morning and power contracts have decreased in price, with low oil prices also helping to weigh on contracts further along the curve.

Market close data has revealed that the 1-year forward price for both commercial gas & commercial electricity decreased - closing at 46.20ppt and £44.20/MWh, respectively. This can be seen in the graph below. 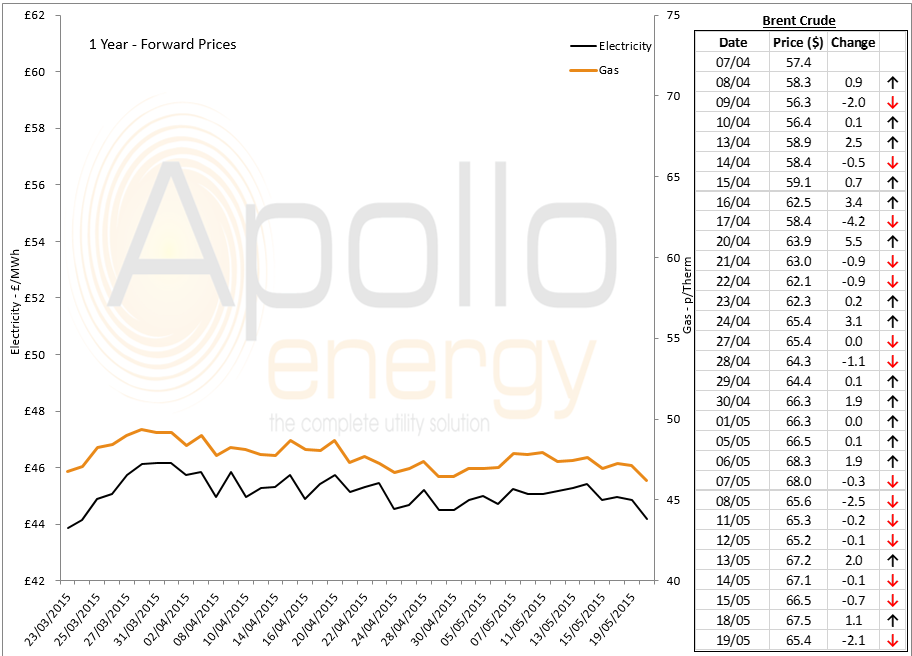 Brent 1st-nearby prices have decreased by over $2/b on the back of on-going oversupply, with news that oil exports from Saudi Arabia in March were close to record levels.