Spot power prices were generally stable yesterday as temperatures have been revised down for this month, with cooler weather creeping in tomorrow and over the weekend across Europe. Bearish sentiment was provided by an improved renewable generation outlook, although nuclear availability is set to be reduced due to maintenance. European gas prices moved down yesterday as supply levels increased and demand fell below the seasonal norm. Demand levels in the UK are set to fall further today, dropping to their lowest point in 2015 so far. BBL flows have also ramped up and storage injections are lower, contributing to a long gas system and further downward movement. Today's prices can also be found in an easy to read table on our 'current UK energy price' page.

Gas prices decreased across the curve on Wednesday on the back of a stronger British Pound and improved supply levels. Dutch imports via the BBL pipeline climbed to 17mcm following zero flows on Tuesday. Meanwhile, maintenance at the Belgium interconnector has halted any imports from the UK into Europe, further improving the supply picture. Power prices also displayed losses but movement was less visible than that displayed on the gas curve. Some downward movement on the far-curve was restricted by stronger coal and carbon contracts, while higher wind generation weighed on the prompt.

Gas prices continue to fall today as the UK gas system remains long on the back of healthy supply and low demand. BBL flows have increased further and storage injections have eased, with a large LNG delivery also expected to arrive in the UK next week. Movement on the power curve is also predominantly bearish as most contracts have followed their gas equivalents, although a cooler weather forecast has provided some resistance. Stronger fuel and oil prices have also limited the losses further along the curve.

Market close data has revealed that the 1-year forward price for commercial gas decreased, while commercial electricity was unchanged - closing at 45.70ppt and £44.00/MWh, respectively. This can be seen in the graph below. 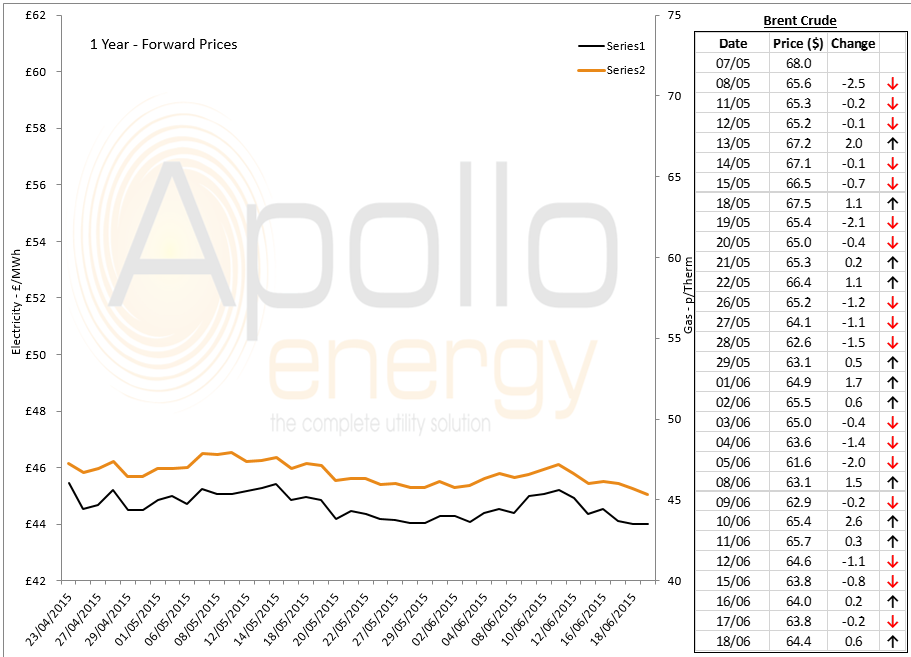 Brent 1st-nearby prices continue to hover around $64/b and have posted a small gain this morning, erasing yesterday's losses.