Spot power prices have increased slightly as renewable generation remains quite low and temperatures are below the seasonal norm, maintenance is also taking place at the Tihange-1 nuclear plant in Belgium, further reducing supply. Gas prices moved down yesterday due to reduced storage injections and a halt in exports from the UK, resulting in an over-supplied system. However, the gas system has fallen short this morning as Norwegian supply has decreased further, lifting prices across the curve. Today's prices can also be found in an easy to read table on our 'current UK energy price' page.

Gas prices climbed higher yesterday as comfortable supply levels were offset by a rise in oil and fuel contracts. The UK gas system was initially 11mcm long but became balanced by around 3pm, while storage injections fell by 13mcm compared to Wednesday. The power curve displayed gains yesterday as contracts followed their gas counterparts. Front-Month added £0.20/MWh to its price but the scheduled LNG delivery next month limited any further increases. A drop in wind generation was also forecast for today which helped to support the Day-Ahead contract.

Gas prices have continued to rise this morning as Norwegian imports remain low and the UK gas system opened short. Meanwhile, it was announced that maintenance at the Rough storage facility is expected to last for 26 days, beginning on the 14th November which will result in zero storage injections during that period. Power prices have been supported by stronger gas and a drop in overall generation with maintenance at nuclear facilities and lower renewable generation increasing reliance on gas and coal-fired production.

Market close data has revealed that the 1-year forward price for both commercial gas & commercial electricity increased - closing at 45.78ppt and £44.09/MWh, respectively. This can be seen in the graph below. 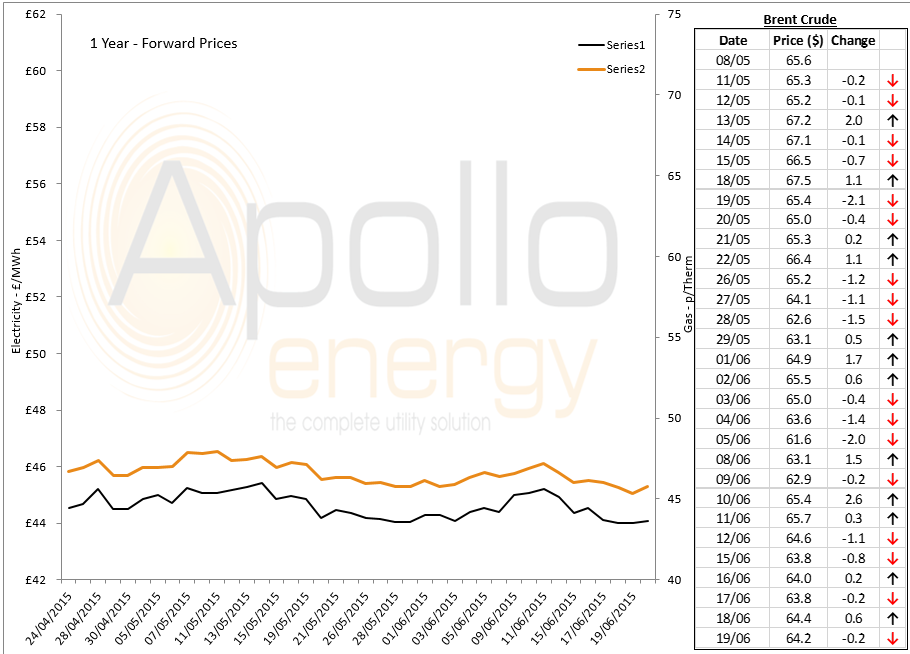 Brent 1st-nearby prices continue to show little change and have displayed small fluctuations throughout the week to remain around $64/b. Movement is subdued as traders are currently torn between a bullish long-term forecast for oil and current fundamentals which are generally bearish.