Spot prices fell slightly yesterday as French nuclear availability improved and wind and solar generation in Germany strengthened. Today, higher levels of wind and hydro production are expected in France which should lead to another price drop. As a result week and month-ahead prices made losses while the warm weather is expected to last another two weeks at least. The UK gas system was short yesterday following reduced LNG flows which led to higher NBP spot and near curve prices. The system remained tight this morning as LNG flows have seen little improvement and BBL flows started the session at zero. Today's prices can also be found in an easy to read table on our 'current UK energy price' page.

Prompt prices registered a series of gains in yesterday's session as the gas system was under-supplied. Day-Ahead rose to 65ppt earlier in the day before falling again as the system became more balanced, finally closing at 64.75ppt. Further along the curve contracts were slightly bullish as the GBP strengthened against the Euro but any price losses were limited by bullish Brent. Near-curve power prices climbed slightly higher yesterday and the spark spread saw no change. Prompt contracts made gains as the warm weather has seen an increase in demand and a few unplanned outages at plants saw Day-Ahead close at £49.80/MWh.

The gas curve saw price increases across the board with Day-Ahead going up by 0.35ppt as the system opened 3mcm short. There was an outage at Theddlethorpe and the South Hook terminal also experienced reduced flows. Gas demand is currently low due to the warm weather and seasonal contracts had their gains restricted by weaker Front-Month Brent prices. The power curve followed a similar direction to gas as most contracts went up but the gains were marginal.   Front-Month APi2 coal climbed by $0.50/tn and Spot EUA prices saw no change while Spot CERs dropped by â‚¬0.01/tn.

Market close data has revealed that the 1-year forward price for both commercial gas & commercial electricity went up slightly - both closing at 68.48ppt and £52.03/MWh, respectively. This can be seen in the graph below. 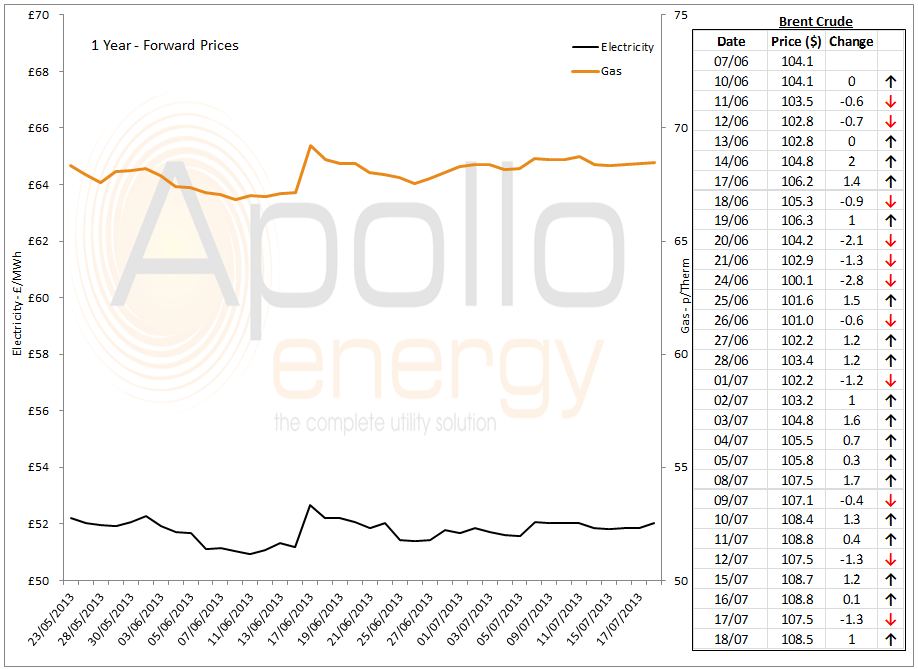 Brent-1st nearby prices added to their price this morning to open the session at 108.5 $/bbl while Front-Month Brent shed $0.88/bbl.