Spot prices fell today as nuclear availability improved and is forecast to increase further in the coming days. Near-term contracts also made losses on the back of lower spot prices and hydro production has also seen a rise which has given support to the bearish market. The UK gas system was tight once again yesterday which led to lower storage injections and reduced exports via the Zeebrugge pipeline. NBP spot and near-curve prices rose as a result but the restart of the BBL pipeline last night is expected to push August 2013 price lower today. Today's prices can also be found in an easy to read table on our 'current UK energy price' page.

NBP contracts went up yesterday with Day-Ahead rising by 0.5ppt to 65.25ppt on the back of lower supply. The Theddlethorpe facility suffered an unplanned outage which limited withdrawals by about 10mcm and flows from the BBL pipeline remained at 0mcm. The Langeled pipeline and the South Hook terminal both registered flows of around 23mcm and Front-Month went up by 0.15ppt. Day-Ahead power displayed similar movement to gas and closed at £50/MWh due to unplanned outages and maintenance at a number of plants. August-13 and September-13 both climbed by £0.10/MWh while the rest of the curve saw no change. The gains were restricted by the warm temperatures despite the Dungeness nuclear facility and the coal-fired Medway plant being taken offline.

Day-Ahead gas and the two front-month contracts displayed no movement this morning from yesterday's close. Further along the curve most contracts went up following stronger Brent prices which rose to $108.74/bbl. The Theddlethorpe facility is expected to return online today but as of yet no withdrawals have taken place on Friday. Day-Ahead power fell by £1.20/MWh, taking influence from the warm weather and higher wind availability which is forecast to be above 1.5GWh in the coming days. Far-curve prices took direction from bullish gas and oil except Winter-13 and the Front-Quarters. Front-Month APi2 coal decreased by $0.25/tn but it is still above its monthly average of $77.55/tn.

Market close data has revealed that the 1-year forward price for both commercial gas & commercial electricity fell slightly - both closing at 68.43ppt and £51.88/MWh, respectively. This can be seen in the graph below. 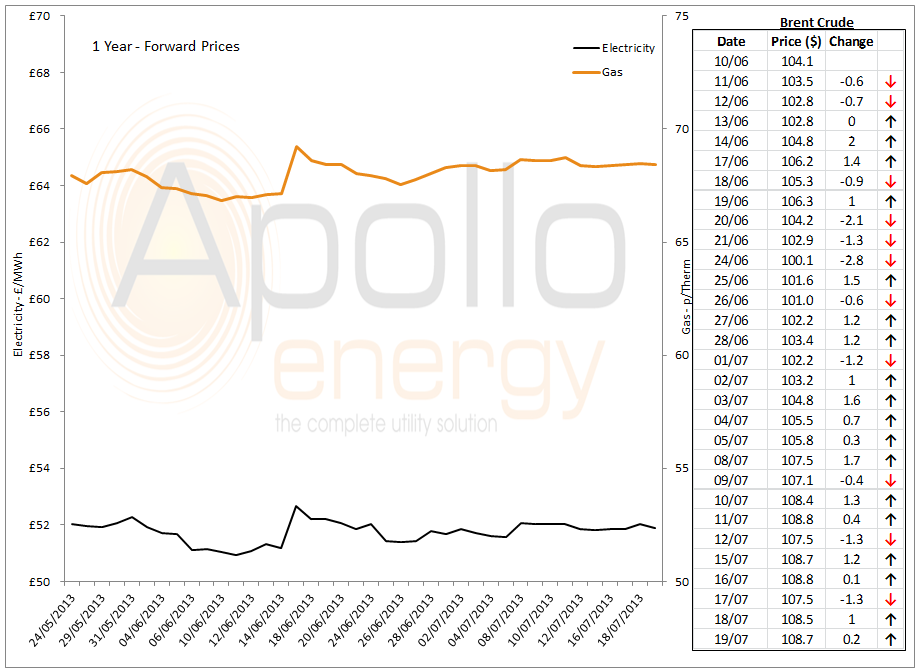 Brent saw very little movement yesterday while WTI hit a 16 month high and added 1.56 $/b. The Brent/WTI spread currently stands at 0.9 $/b which is its smallest difference in 3 years. A recent report from Genscape shows that crude stocks have fallen by 2Mb at the Cushing facility and that Gasoline stocks have been reduced by 10% following an increase in US exports.