Spot power prices have displayed mixed movement this morning as some supply issues have offset the effects of weaker gas. A fault at the Tihange-3 nuclear facility in Belgium and issues at a large coal-fired power plant in Holland are the main factors for today's weaker supply levels. Gas prices moved down yesterday despite a 22mcm reduction in flows via the Langeled pipeline, as strong LNG send-outs contributed to a comfortable system. LNG send-outs remain healthy this morning with several deliveries expected to arrive in the UK this week; prices have decreased further as a result. Today's prices can also be found in an easy to read table on our 'current UK energy price' page.

Gas contracts shed from their price on Monday with direction coming from a rise in LNG send-outs, as a drop in Norwegian supply was largely ignored. Output at the South Hook LNG terminal ramped up to 58mcm, compared to 30mcm on Friday with four deliveries scheduled to arrive over the next seven days. Norwegian flows into the UK fell by 18% which helped to restrict some of the losses on the near-curve, while weakening oil weighed on far-curve contracts. Power prices also moved down yesterday, with losses observed on the gas curve the main bearish factor. A stronger wind forecast helped the prompt close at a discount, as this should counter the effects of weaker nuclear generation. Meanwhile, the 505MW unit 7 Hinckley B power plant went offline over the weekend and isn't expected to return until next week.

The healthy LNG outlook continues to provide downward pressure on the gas curve with the prompt falling by 0.90ppt. Norwegian supply remains low due to maintenance but the UK gas system is balanced due to healthy send-outs, while another drop in oil has weighed on some far-curve contracts. Power prices display mixed movement this morning with some supply concerns on the continent providing support to seasonal contracts. Elsewhere, a healthier renewable generation forecast has helped Day-Ahead decrease by £1.00/MWh, which ignored reduced nuclear production.

Market close data has revealed that the 1-year forward price for commercial gas decreased, while commercial electricity moved higher - closing at 42.03ppt and £42.63/MWh, respectively. This can be seen in the graph below. 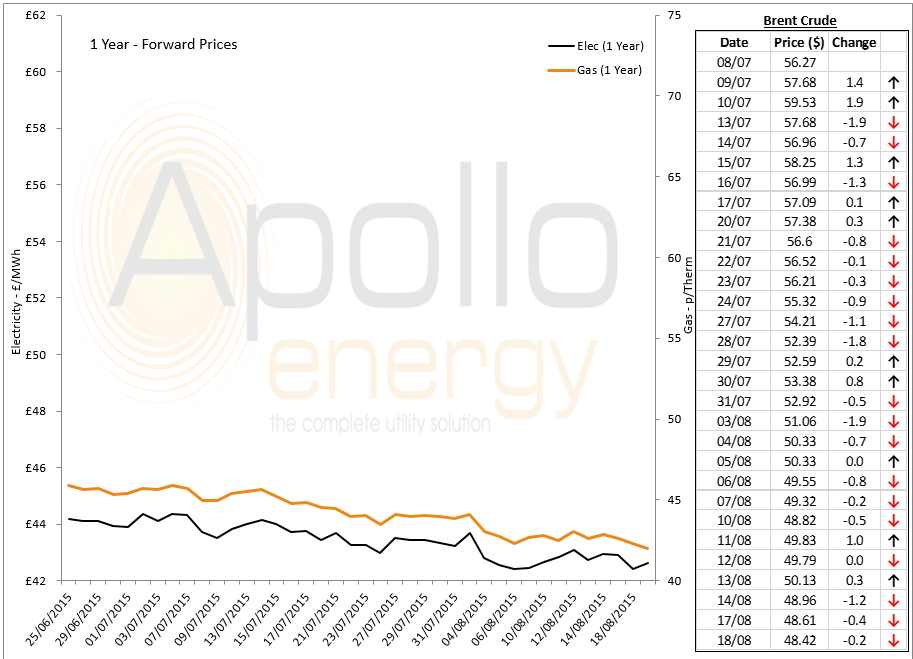 Brent 1st-nearby prices have recorded another loss overnight and stand just above $48.4/b this morning with strong production levels and weak economic data in Asia providing support.