Spot power prices displayed gains yesterday afternoon as wind generation was set to decrease today and demand levels were slightly above average. Meanwhile, an outage at a large nuclear power unit over the weekend provided an additional strain on supply. Today's outlook is stable-to-bearish with downward pressure coming from weaker gas and coal. Gas prices moved down yesterday as strong LNG supply continued and offset the drop in output at the Langeled pipeline; with a stronger British Pound also a factor. Prices have recorded further losses this morning as Langeled output has improved slightly and LNG send-outs remain high. Today's prices can also be found in an easy to read table on our 'current UK energy price' page.

Near-curve gas prices decreased yesterday following another rise in LNG send-outs from South Hook. Send-outs increased by 2mcm from Monday's levels to 60mcm, double what they were last Thursday. The UK gas system was 14mcm long in the morning despite a 31mcm drop in Norwegian supply as a result of scheduled maintenance at gas fields. The majority of power contracts moved down on Thursday and followed the movement of gas and oil. Day-Ahead shed £0.55/MWh from its price to end the session at £40.50/MWh, despite the announcement that a Scottish coal-powered station will be closed permanently; instead the contract was influenced by stronger renewable generation.

Strong LNG output continues this morning to make room for three deliveries which are expected to arrive at South Hook this week. A slight rebound in oil provided some restrictions further along the curve but overall movement is bearish. Power prices display minor losses this morning with some contracts opening unchanged as the supply/ demand outlook is rather weak on the back of lower nuclear generation and a drop in wind production. Further out, some contracts have held their price with the help of stronger Brent.

Market close data has revealed that the 1-year forward price for both commercial gas & commercial electricity decreased slightly - closing at 42.00ppt and £42.50/MWh, respectively. This can be seen in the graph below. 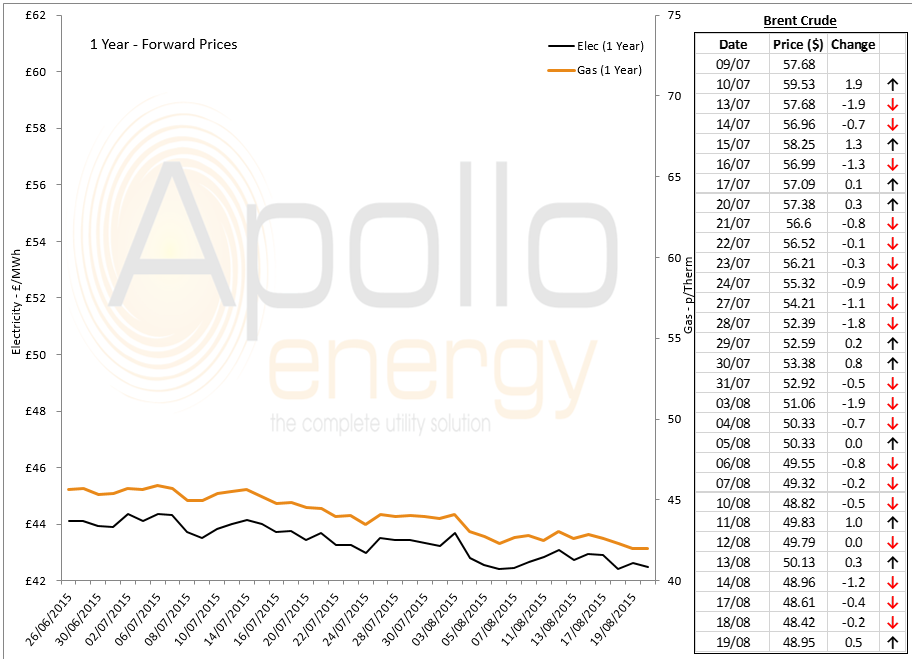 Brent 1st-nearby prices were stable throughout yesterday's session but recorded a gain of over $0.50/b overnight ahead of this week's EIA report.