Spot prices moved down yesterday on the back of ample supply levels and lower demand for this time of year due to milder temperatures. Today prices should stay relatively firm as there is little change in fundamentals. Gas prices inched higher yesterday following a drop in Langeled flows leading to a tighter UK system. Today UK LDZ demand has fallen by 3mcm and is 8.9% below the seasonal average, Norwegian and interconnector flows have improved somewhat and milder temperatures are expected; prices should remain firm as a result. Today's prices can also be found in an easy to read table on our 'current UK energy price' page.

Gas prices began yesterday's session with numerous losses but strengthened throughout the day with most contracts posting gains by the end of the day. Day-Ahead rose by 0.60ppt as the system was 15mcm short as Langeled, South Hook and Rough flows dropped. Day-Ahead power climbed £1.45/MWh higher despite the forecast of stronger wind generation levels today. The rest of the power curve was generally bearish but the losses were minor, ranging from £0.10/MWh for Front-Month and £0.30/MWh for Winter-15; weaker Brent and APi2 coal were the main contributors for the downward movement.

Movement for gas contracts varied this morning with Day-Ahead decreasing by 0.20ppt and quarterly & seasonal contracts rising. Linepack was balanced despite the interconnector importing to the UK for the first time in a fortnight. Storage withdrawals were at a rate of around 40mcm and UK storage facilities are nearly 87% full. The power curve moved higher except for Day-Ahead which opened at a £0.90/MWh discount despite a fall in wind generation expected for tomorrow. Flows from both interconnectors dropped and gas-fired generation has increased its share of the generation mix.

Market close data has revealed that the 1-year forward price for both commercial gas & commercial electricity climbed higher - closing at 68.60ppt and £53.33/MWh, respectively. This can be seen in the graph below. 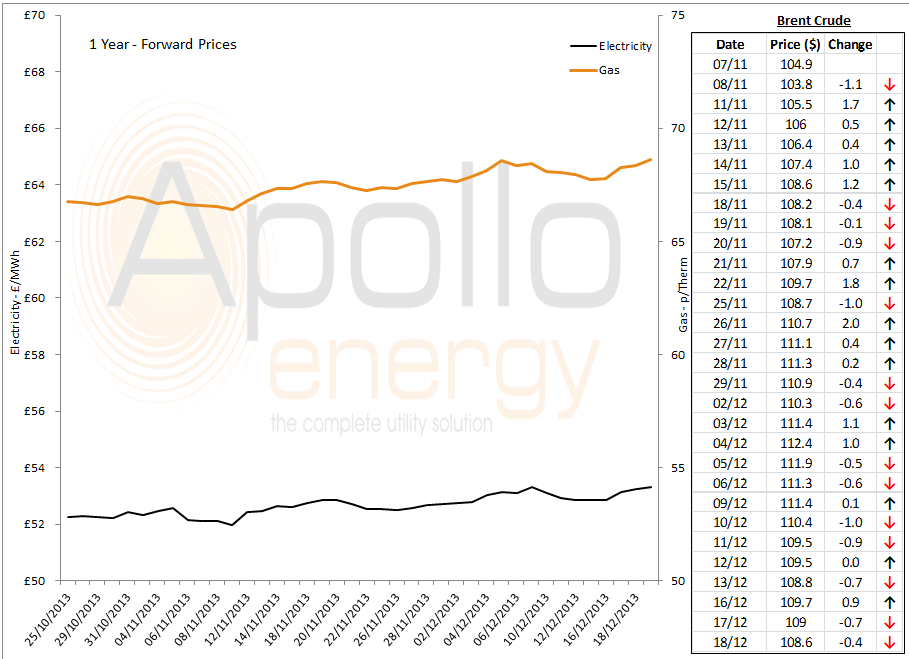 Brent 1st-nearby prices fell by $1.2/b yesterday following a contract expiry and a bearish Fed report. WTI remained around $97/b and the Brent/WTI spread currently stands at -$10.5/b.