Spot prices gained in price yesterday as wind generation fell today and numerous outages at coal and lignite plants affected supply. Gas prices also moved higher during yesterday's session due to an undersupplied UK gas system and a slight rise in residential demand. UK LDZ demand climbed by 29mcm today but it still remains below the seasonal average. The gas system was short this morning but the continued milder weather could weigh on prices. Today's prices can also be found in an easy to read table on our 'current UK energy price' page.

Gas contracts rose across the curve yesterday with Day-Ahead opening at a 0.05ppt premium as temperatures were forecast to drop slightly today. The gains ranged between 0.10ppt for Summer-15 and 0.75ppt for Q2-14; stronger Brent being the main driver of prices. The UK gas system was balanced by the end of yesterday's session despite low flows from South Hook of 5mcm. Day-Ahead power increased by £1.45/MWh as a result of a lower wind generation forecast for today. The rest of the curve was generally bearish and took influence from lower coal costs which fell by $1.00/tn due to supply concerns going into the New Year.

Most gas contracts moved down this morning as flows increased and storage withdrawals almost tripled from yesterday's figure, despite this increase Linepack only opened 4mcm long. Most of the losses were observed on the near-curve with Summer-14 falling by 0.10ppt as Brent prices decreased slightly. Power prices followed a similar trend to gas; Day-Ahead fell by over £4.00/MWh as wind generation is set to improve tomorrow. Import flows via the French interconnector ramped up after its export capacity was maxed out last week. Meanwhile seasonal contracts showed minimal change as prices were torn between Brent and coal movement.

Market close data has revealed that the 1-year forward price for both commercial gas & commercial electricity climbed higher - closing at 68.36ppt and £53.25/MWh, respectively. This can be seen in the graph below. 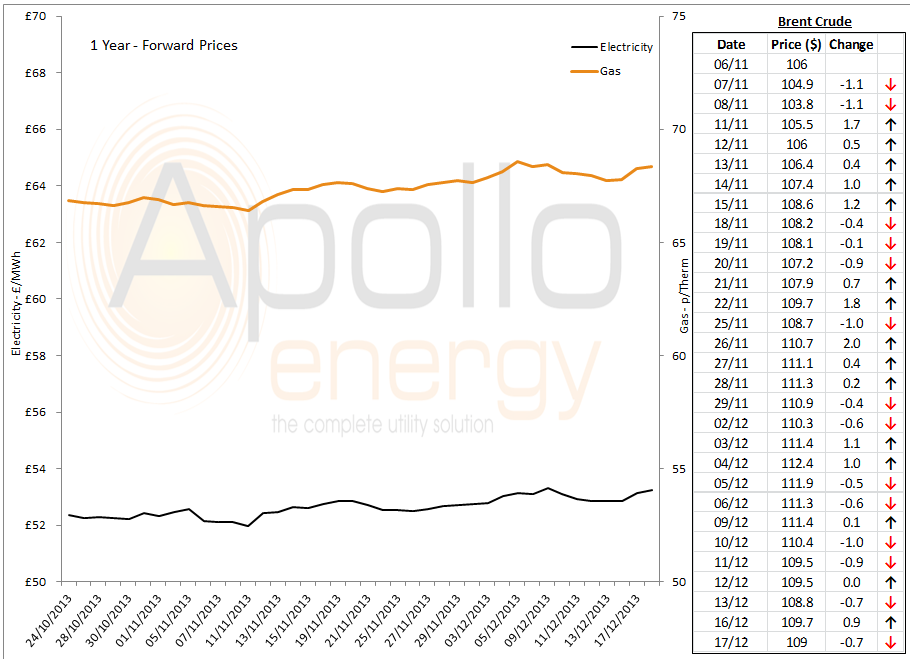 Brent 1st-nearby prices were bullish yesterday and added $1.64/b by the end the session above $110/b. However this morning prices fell back below $109/b as the February delivery contract starts its cycle. WTI increased by $0.88/b and the Brent/ WTI spread now stands at -£12/b.