Spot power prices increased slightly this morning as wind generation remains weak and nuclear production did not improve as much as expected; a stable outlook is anticipated for this afternoon. Gas prices decreased on Friday as healthy supply levels and warm temperatures helped the bears take control of the curve. UK LDZ demand is expected to fall by a further 7mcm today although cooler temperatures are expected later in the week; prices are expected to hold firm this afternoon. Today's prices can also be found in an easy to read table on our 'current UK energy price' page.

The gas system started the session close to balance on Friday but gained length throughout the session which helped Day-Ahead fall by 0.60ppt. The rest of the near-curve also moved down with Front-Month decreasing by 0.30ppt. Further along the curve the losses were less pronounced as Winter-14 fell by 0.20ppt and Winter-15 shed 0.25ppt from its price. Power prices took influence from weak gas with losses ranging from £0.10/MWh to £0.35/MWh across the curve. However, some support was offered to seasonal contracts by stronger carbon as December-14 EUAs climbed to around $5/tn.

The gas curve opened with a series of gains this morning with Day-Ahead registering the largest price increase of 0.60ppt. Linepack began the session balanced but quickly fell short following a drop in gas flows as the BBL interconnector is currently flowing at a rate of 9mcm. Power contracts followed the movement of gas closely as despite an improved wind generation forecast for tomorrow, Day-ahead added £0.75/MWh to its price. Gains were observed across the curve but were much smaller than the prompt as Front-Month climbed £0.25/MWh higher.

Market close data has revealed that the 1-year forward price for both commercial gas & commercial electricity moved higher - closing at 59.43ppt and £50.15/MWh,respectively. This can be seen in the graph below. 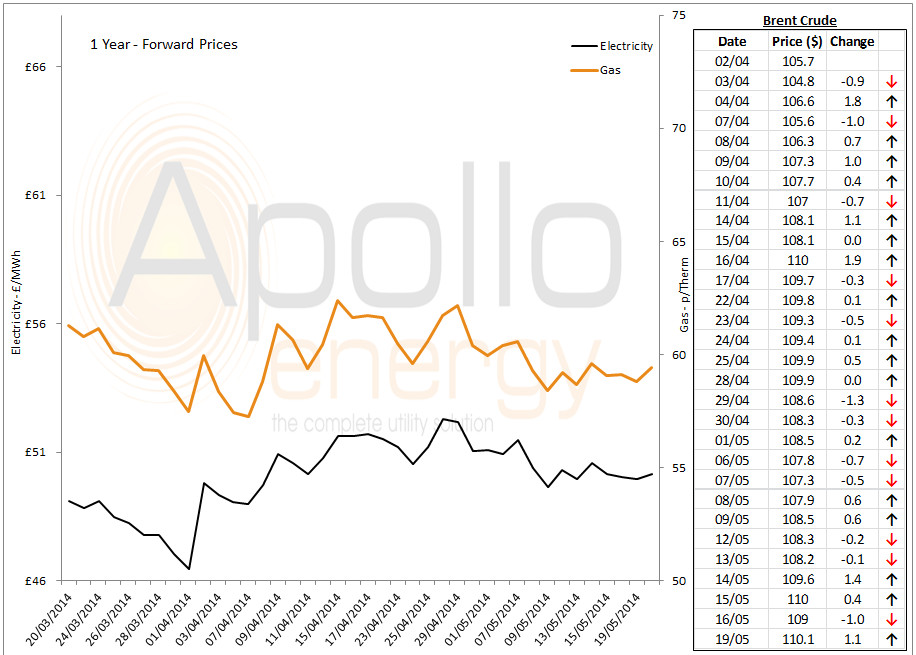 Brent 1st-nearby prices were bullish on Friday with support coming from the on-going tensions in Libya and Ukraine. Brent currently trades at just over $110/b while WTI rose by $0.50/b which has taken the spread to below -$8/b.