Spot power prices climbed higher yesterday as supply was somewhat reduced following a drop in French and German nuclear production and minimal wind. Cooler weather is expected at the weekend which could lead to gains later in the week but after opening lower, prices are expected to hold firm this afternoon. Low demand levels did little to influence gas prices yesterday as a drop in BBL flows and an increase in storage injections resulted in a short UK gas system, pushing prices higher. Today a rise in LNG output should make up for the reductions elsewhere, demand levels also remain low and prices are expected to move down this afternoon. Today's prices can also be found in an easy to read table on our 'current UK energy price' page.

Gas prices recorded losses yesterday with Day-Ahead decreasing by 0.05ppt despite the UK gas system falling 9mcm short. Larger losses were displayed further along the curve as Winter-14 closed at a £0.65ppt discount. Day-Ahead power showed no movement yesterday and ended the session at £39.50/MWh. Changes to near-curve contracts were minimal in general with July-14 and August-14 also closing flat. However, seasonal contracts registered a loss as Winter-15 shed £0.40/MWh from its price and took direction from gas.

The UK gas system was 20mcm long this morning which helped Day-Ahead to drop by 0.45ppt. Flows via South Hook and Langeled have improved although overall gas flows are slightly down from yesterday due to lower Dutch imports. Gas storage levels are in excess of 70% while UK LDZ demand is at around 69mcm. Weaker gas prices influenced the power curve as most contracts traded lower this morning. Healthy supply and a drop in carbon contracts also offered bearish pressure further along the curve.

Market close data has revealed that the 1-year forward price for both commercial gas & commercial electricity decreased - closing at 58.58ppt and £49.65/MWh,respectively. This can be seen in the graph below. 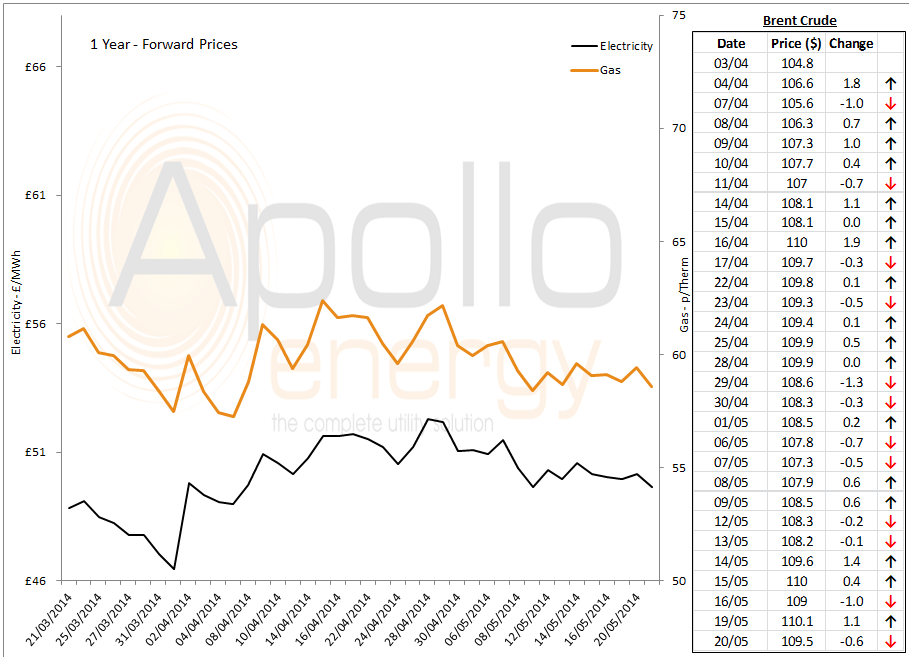 Brent 1st-nearby prices fell by around $1/b yesterday while WTI moved slightly higher which has taken the spread to -$7/b. The Ukrainian situation remains relatively stable while problems in regards to Libyan oil are as bad as they are likely to get and can have no further effect on the market, it is thought.