Spot power prices have declined as overall generation levels have improved across Europe. Nuclear availability in France is much healthier today, while wind and hydro generation has also increased. Gas contracts continued to display a bearish trend yesterday as demand levels were reduced and supply remained high. This trend continues this morning as LNG supply is strong in order to free up space for scheduled deliveries this week. Today's prices can also be found in an easy to read table on our 'current UK energy price' page.

Price-drops were displayed across the gas curve yesterday as high LNG supply and a sizeable drop in oil prices helped to pressure down contracts. LNG send-outs fell by 1mcm to 59mcm but output still remains 97% higher than last week's levels. Demand fell by 10mcm as gas-fired generation was reduced due to a rise in wind generation; this helped Day-Ahead to close at a discount Power prices also recorded further losses with weakening gas and oil the main market drivers. Day-Ahead fell below £40/MWh to trade at its lowest level since June, while Front-Month decreased by £0.25/MW and also traded below £40/MWh. Further out, an increase in coal and carbon emission certificates slightly offset the effects of falling Brent.

Gas prices have decreased again this morning as demand levels are lower than previous days and LNG send-outs are high; Norwegian imports into the UK are also improved slightly. Meanwhile, a sharp drop in Brent has provided additional bullish pressure on the far-curve. Power prices continue to follow the movement of their gas counterparts and losses are visible across the curve. An improved wind generation forecast has helped the prompt to fall by £1.25/MWh, while weaker oil and coal have weighed on some far-curve contracts.

Market close data has revealed that the 1-year forward price for both commercial gas & commercial electricity decreased slightly - closing at 41.60ppt and £42.15/MWh, respectively. This can be seen in the graph below. 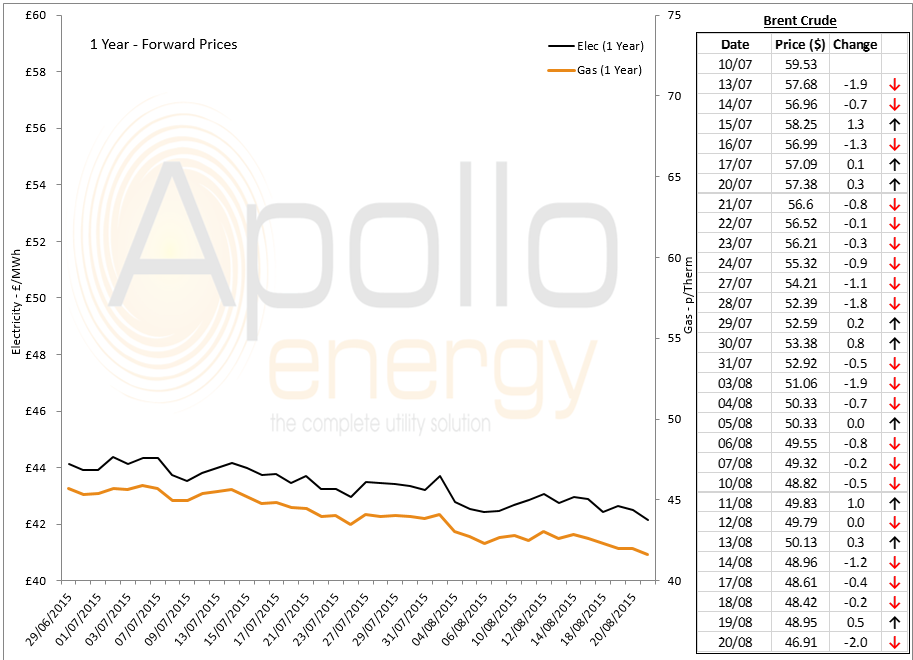 Brent 1st-nearby prices have recorded a significant loss on the back of a bearish EIA report which displayed a rise in Saudi Arabian oil exports.